When you think of testing your dog or cat for worms, your mind immediately goes to checking the poop. That’s accurate for the majority of worms! However, there are some important exceptions, both IN and OUT of the poop you should know about.

Let’s start with the ones you’re thinking of. Worms you can see in your dog’s or cat’s feces, and even sometimes stuck to their bottom, are tapeworms. Other worms we don’t often see coming out, because they choose to stay inside your pet, and they reproduce by sending their microscopic eggs out via the poop. These are roundworms, hookworms, and whipworms.

There are two parasites that can live in the intestines and cause some pretty impressive diarrhea. In tiny puppies or kittens, the diarrhea can become so severe it’s life threatening! Giardia and coccidia are not worms, but instead they are small, microscopic, single celled organisms. They cannot be seen with the naked eye, but they can sure make intestines mad! Both are found in the ground, although giardia tends to prefer wet ground and especially puddles or stagnant water. I have more details about giardia and coccidia in other articles.

Ringworm is not a worm at all – it’s a fungus! The medical term is dermatophytosis. The reason it got the silly name was, hundreds of years ago, when people were infected with the fungus on their skin, it showed up as a round spot that looked like a worm under their skin. They didn’t know any different! Even though we know now it isn’t a worm at all, the name stuck.

Ringworm in dogs typically looks like a bald patch that is round, and the hair on the edges falls off real easily. There’s often some flakes, but the spot isn’t really itchy! In cats, ringworm can be a bit of a disaster. Some cats (usually kittens) present with a bald spot. Others have this crusty stuff. It can be anywhere on the body, from a tiny spot, to several spots. Here’s the kicker: some cats can have ringworm, and spread the fungus to other cats (or their people!) and have NO symptoms! 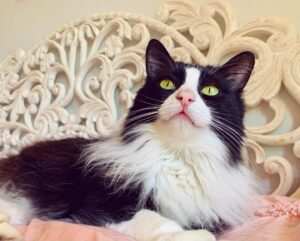 The way the fungus is spread is through contact, and it’s spreads pretty easily. The contact can be direct, like you snuggle the kitten in your arms, then get a red itchy spot on your arms. Or it can be indirect, like you brush a cat that has ringworm (even though it might not look like it) and then brush a cat that didn’t have it (and now it probably does). I’ve seem some ringworm that is super contagious, and most of the kids (it’s usually kids more than adults) in the house have it from the new kitten. I’ve had other cases where the kitten looks ROUGH but no one in the house got it… ever. So different types of fungus have different abilities to spread.

How do we test for it? Well, we don’t look at the poop, like we do for most worms! There’s a couple tests. The gold standard is called a DTM – Dermatophyte Test Media. Basically, we pluck some fur at the edge of the suspected spot, and grow it in a petri dish. If it’s a cat with no spots, we can actually use a sterile toothbrush and “comb” them with it, and put that in the culture. The bummer is, ringworm grows really slow, as any fungus does. So it takes a week or two for this to grow. If there’s a fungus growing, we also have to then look at it under the microscope and ID it. Is it really ringworm? Is it a contaminant? It’s a bit complicated!

There’s another test we can do that is more instant, but less accurate. If we shine a black light on the area, one species of ringworm will glow candy apple green.  Since there are many different species of ringworm fungus, the lack of glowing doesn’t mean it isn’t ringworm. But if you get lucky and it lights up, it’s a good indicator.

Many years ago I had a very concerned family bring me their cat, and the complaint was they were worried the cat had ringworm. I started asking the questions: are there any bald spots? Has anyone in the family been diagnosed? Nope. Why were they worried about ringworm? Well, the litter box is in the basement. They scoop it every couple weeks, and when they scoop it, there’s white fuzzy stuff on the poop.

If the dog or cat does have ringworm, how is it treated? Well, depends on how widespread it is. The old school method was a very smelly liquid you covered your pet with called Lyme-Sulfur dip. It’s safe, since it’s topical, but holy wow, the smell! If it’s just a tiny spot, a topical medication like Tresaderm does the trick very well, no smell! There are also oral anti-fungal medications, both as a pill, or they can be compounded into flavored liquids for picky dogs and cats. You can talk to your veterinarian about what is the best for your particular pet.

Many dog owners come in for their annual exam, and ask if the fecal test was negative for heartworm. Nope, that one’s not in the poop! Fecal tests are important to look for every other kind of worm, but heartworm is an outlier. In this case, fortunately, the name is not deceiving, because heartworms do hang out near the heart. The way we test for heartworm is by checking the blood. I have a whole series on heartworm here for more detail. The purpose of discussing it here was another reminder of a worm that doesn’t live in the intestines.