Whipworms are an intestinal parasite that are so annoying, they actually deserve their own article! They live in the large intestine/colon, sucking nutrients, and sometimes causing gross, mucousy stool. Your dog might squat and squat and not much comes out. Some owners interpret this as constipation, rightfully so, but it is actually a form of diarrhea – just not the form you’re used to cleaning up. Sometimes the mucousy poop can have a little blood in it. Some dogs can have such a severe case of whipworms, they develop profound abnormalities on their blood panels!

First the good news: cats in reality don’t get whipworms, only dogs. So 50% of my patients just breathed a sigh of relief.

The bad news? Well, there’s a lot to talk about. Some dogs with whipworms get very very sick. Others have them with no symptoms whatsoever. It depends on the health of the dog, the duration of the infestation, and the severity (how many worms, and how long the dog’s had it, basically).

This is the first problem. In a stool sample, we are looking for microscopic eggs. Most parasites, like roundworms or hookworms, release eggs at a rather steady rate. If your dog has those worms, we will know! No, you won’t see them just by looking at the stool, but microscopically, the eggs always show up for the party. What makes whipworms hard to detect? They only release eggs about once every 2 weeks. So if you’re in the early stages of infestation, have a couple worms, imagine the odds of getting the poop sample at the same time those worms release eggs! Dogs with a high number of worms are the ones we often find out about. Get enough in worms there, and even though they release about every 2 weeks, they are not synchronized, so somebody’s shedding eggs at some point all the time.

Because whipworm eggs don’t like to show up in a fecal sample, if your veterinarian does a test and it comes back negative, it doesn’t necessarily mean your dog does not have whipworms. False negatives are quite common here. If we suspect it, we’ll often treat it just to be safe. 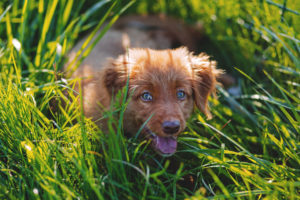 Who knows what microscopic eggs lurk in the grass?

This is the other feature of whipworms that frustrates owners and veterinarians alike. Nothing kills whipworm eggs. Sunlight? 100 degree heat? Freezing? Ice? They love it all! These suckers can persist in your yard (or the park!) for up to 6 years! So if you treat your dog, but she’s hanging out in the same yard, it’s only a matter of time before she gets whipworms…again. Munching on grass, or walking on eggs and then licking a paw, are the two most common ways dogs ingest the eggs.

Because whipworm eggs are built to basically survive everything short of a nuclear war, we focus on the dog, not the eggs in the yard. Several monthly heartworm preventatives are available that prevent re-infection of whipworms. So, once you treat the pet, most often with a medication called fenbendazole/panacur, or albendazole, we then talk about your heartworm preventative. Interceptor, Sentinel, Trifexis, and Advantage multi all are given monthly for heartworms (among other things) and prevent whipworms from setting up house inside your dog! (here’s my article on which heartworm preventative does what.)

If your dog is squatting frequently and having mucousy or bloody stool, that could be a symptom of whipworms. Certain abnormalities on a routine blood panel can indicate to look for whipworms as well – this is only the case with severe infestations, thankfully. Most often, we’re simply running a routine fecal test for intestinal parasites, and we catch them before they cause symptoms. If we suspect it, we’ll often treat with a broad spectrum dewormer to “clean the house” and if symptoms resolve, we indirectly have our answer!