It happens quite often that I’ll run a blood panel on a seemingly healthy senior dog, and I discover one or two liver enzymes are higher than normal. How worried should we be? Well, it depends, but here’s some general patterns.

The usual culprit is an enzyme called Alkaline Phosphatase, or Alk-Phos, or Alk-P. I commonly see this enzyme rise in older dogs that have no symptoms. The other liver enzymes always seem to be behaving – it’s just this one that’s wonky. The normal range depends on the lab your veterinarian uses, but most consider anything up to 130 or so as normal. It’s not a shock at all to see a dog have an Alk-P of 200, even 400. My old dachshund mix has had an Alk-P over 300 for the last 3 years. He’s doing great.

This enzyme drives a lot of veterinarians crazy. We need to look at the whole dog, and the severity of the increase. For starters, if the other liver enzymes are normal, the dog has not lost weight, bloodwork is otherwise perfect, many veterinarians will simply recheck the blood in a couple months. If everything else stays in line, and the Alk-P is not rapidly rising, maybe even dropping, we’ll be happy, shrug our shoulders, and say we’ll keep tabs on it.

We get worried about Alk-P when it becomes drastically high, like 800, or 1,500. Then there’s probably something going on. One possibility is a disease of the adrenal gland called cushings disease. With this disease, the adrenal glands produce too much adrenaline, making the dog start drinking lots of water (think of a dog on prednisone), possibly have hair loss, and can even develop a pot belly. (Here’s my in-depth article on cushings disease). The excess adrenaline causes an increase in Alk-P, with other liver enzymes staying the same. I can’t tell you how many second opinions I get where the veterinarian did routine blood work on a healthy dog (senior screen, pre-anesthetic for a dental, etc), found a mild-moderate increase in Alk-P, and wants to diagnose cushings. That’s not how we diagnose cushings. Again, we have to look at the whole dog. If your dog isn’t drinking a lot, or showing any other symptoms, that high Alk-P is most likely not cushings.

What else can cause an Alk-P to elevate while the other liver enzymes stay the same? Liver tumors. I’ve seen both benign and cancerous masses on the liver causes this change in the bloodwork. One patient had a tumor the size of a volleyball on her liver. She had it removed at the specialist, her Alk-P went back to normal, and she went on with life.

Guess what else can cause an increase in this liver enzyme – severe dental disease! The liver is trying to filter all that infection, and it’s not pleased. I had an older dog that we drew pre-anesthetic bloodwork on for a dental cleaning. Her Alk-P was over 800, so we took notice! We had her abdomen ultrasounded, worried about putting a dog under anesthesia with a questionable liver. The ultrasound specialist said “how soon can you do the dental and get this liver happy?” So do not let an increase in liver enzymes prevent your dog from having a dental if he has significant disease! In this case, we ended up pulling many teeth (this dog had SEVERE dental disease) and when we rechecked the blood 2 months later, all had gone back down to normal! 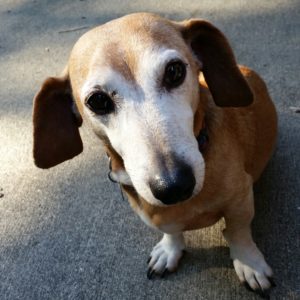 So if we get a really high Alk-P, an ultrasound of the abdomen (the liver) is a very good idea. What if it’s normal? Well, this is where it gets tricky. I have many dogs with elevated Alk-P on their bloodwork and very normal livers on ultrasound. Good news…but now what? The only way to get a 100% diagnosis of liver disease is with a biopsy. Yep, we have to cut a piece out of the liver and send it off to the lab. If your dog is acting sick, losing weight, or we know something ain’t right, this can be a great step! If your dog is healthy, happy, not losing weight, just had routine bloodwork done and has one elevated liver enzyme…do you want to go cutting into your dog? I’m not sure I would on my dog!

This is the point where I tell owners they are not terrible people if they choose to do nothing. Of course, if your dog decides to start showing any symptoms, we have a different story. But I can’t tell you how many healthy older dogs have mild-moderate increases in Alk-P and it never amounts to anything. There is a syndrome called vacuolar hepatopathy that can only be diagnosed on liver biopsy, but is common in older dogs…and doesn’t really do anything except cause these changes on the bloodwork. So for owners who want a name for the probable underlying cause that really isn’t much of a thing, we can say we suspect vacuolar hepatopathy….sure, why not.

What about other liver enzymes? If your dog has an increase in ALT (alanine transferase) then this could be different. I commonly see Alk-P rise in older dogs, but I not-so-commonly see ALT rise. If BOTH of these enzymes are high, then I would do some looking into it….literally….with an ultrasound. Again, if that shows no cancer or craziness, it doesn’t mean the liver is normal, just that it looks superficially normal. In healthy dogs, we’ll routinely recheck the blood in a couple months and see what direction these enzymes are going. I’ve had cases where I recheck and they are normal. Can’t explain what was going on, but we’ll take it! Other times, if they are on the rise, there’s something up. Sometimes I’ll add a medication I call the “happy liver pill.” Denamarin is the brand I use. It contains the tools the liver needs to repair itself, if it feels the urge. If the liver is not in a self-healing kind of mood, this supplement will not help. But if the liver IS in the mood, all the tools it needs are right there! This medication is well-tolerated in most dogs, so many owners take the “it can’t hurt!” attitude and try it.

The main two liver enzymes we look at on routine screens are Alk-P and ALT. There are a couple other players that tend to behave – GGT and total bilirubin. I rarely see an elevation in either of these without the main two first getting involved. These enzymes both loosely correlate to the gallbladder and bile ducts. If they are high, I take notice. Especially if they are part of a theme of all liver enzymes being high.

I of course can’t go into every possible liver disease here. This was more to help calm the nerves of the typical dog owner whose dog has some slight changes on the senior blood test. Sometimes there’s an underlying disease process, but many times there isn’t! I also do not let a little high Alk-P prevent a painful dog from getting arthritis medication. Again, we have to look at the whole dog here, and maintaining a good quality of life.

Bottom line – if your veterinarian tells you your otherwise healthy dog has a single liver enzyme that’s high and she’s not too worried about it, you shouldn’t be either. Rechecking blood in a month or two can tell us if we caught something early, or if this is our new normal. And if you want to make sure, an ultrasound of the liver is not invasive, doesn’t require anesthesia, and may rule out some scary things.