It is quite common for a kind person to find a stray cat, take it in for a few days to find an owner, and end up keeping the cat as part of their family. I often see these cats for their first veterinary visit after the new pet parent has had them for a week or two, and no owner came forward. Ideally, they would have kept the new arrival separate from the resident cats, but this is not always the case.

The first thing we do is test the new cat for two disease: Feline Leukemia Virus (FeLV) and Feline Immunodeficiency Virus (FIV). Both of these diseases are contagious to other cats, can be fatal, and have no treatment. So it’s a big deal to make sure the cat is negative for both before introducing them to the rest of the family.

Every once in a while, the cat will test positive for FIV. This is like the cat version of AIDS in people. These cats look normal, physical exam is normal, and often there’s no indication of anything being wrong. It comes as a shock to the new adopter, and then the question becomes “can this cat with FIV give it to my other cats?”

Years ago, cats with FIV in shelters were euthanized immediately. Then, as we learned more about the disease, they started being adopted out as single cats. Many of these cats lived normal lives. So what’s the deal? 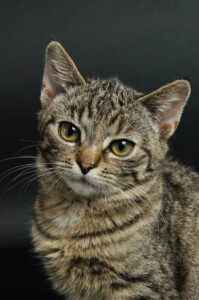 Photo by Wojciech Kumpicki from Pexels

The presence of the virus in a cat does not mean they will have active disease. It behaves similarly to people with HIV, who can have the virus in their body, but it only causes major problems when it activates to be AIDS. Cats with FIV can develop symptoms and get very sick at a young age, or they may live their whole lives and never have FIV-related symptoms!

So if you fall in love with a cat, and learn it has FIV, what can you do? If you have no other cats, it’s easy. Take that kitty home and spoil them! If you have other cats, it can be a challenge, but not impossible.

How is FIV transmitted to other cats? Again, it’s very similar to HIV in people. So casual contact does not spread the virus. Two cats have to have intimate contact that involves the mixing of bodily fluids. This includes sex, sharing drug needles (keep your cat off drugs!) or, the most common way, fighting. Cats who fight and bite will mix saliva and blood, and this is the most common means of FIV transmission between cats.

Sharing food bowls or cuddling in bed together will not spread FIV from one cat to another. So in theory, if you have multiple cats that are all old friends, and one has FIV, you have no reason to worry. The concern is introducing a new cat with FIV into the existing group, since there could be fighting. Of course, if you are diligent about making proper introductions and monitor body language and reactions closely, it is possible for a cat with FIV to join your family with no risk to other cats – it’s all about them getting along!

What concerns should you have for the health of your cat with FIV? As they age, cats who are FIV positive are five times more likely to develop cancer. They are also more prone to infection. The most common ailment I see is stomatitis. This is a profound inflammation of the gums, palate, and/or throat that can be VERY painful and cause the cat to not eat. Cats with FIV and stomatitis often are never cured, we just try to keep them as comfortable as possible, and we never seem to really win.

Cats with FIV can be vaccinated like any other cat. And we encourage it, since if they do encounter a disease, their immune system likely will not be able to fight it off as well as a normal cat. The can be fed regular food, with no specific requirements. I recommend routine deworming and flea prevention, again, since they might not fight off disease as well as an FIV negative cat. And most importantly, keep them inside! We do not want to put other cats at risk of contracting FIV if they pick a fight with your cat.

I’ve seen FIV go a lot of ways. I had one cat who had FIV her whole life. When she died at the ripe old age of 17, it was complications of her diabetes, nothing to do with FIV! I’ve had other patients I’ve put to sleep as young as 4 years old. Their mouth and gums were so painful they were unable to eat, and pulling every tooth and having them on 5 medications for months did not help. It was heartbreaking. So sometimes the virus wins. Just like in people with AIDS. Other times the virus stays under the radar. There’s no way to predict which way it will go. We just keep them safe and hope for the best!