How can you tell if your dog is in pain? I wish we could just ask them!

When it comes to concealing pain, dogs have mad skills. Many of them are people pleasers. Very few dogs want to be a party pooper.

So, hurting or not, the show must go on! They don’t want to let on if they are hurting. They will fake it and fake it, and by the time the symptoms are obvious, the disease has progressed to the point where despite trying their best, they just can’t fake it any more. If they would just let on they were hurting, it would make veterinarian’s jobs so much easier!

A good friend of mine had terrible arthritis in her hips and knees – just the way she was made. She ended up having both hips and one knee totally replaced before she was 50! Before her surgeries, when we’d meet for lunch, she was in severe pain. Even with medications, it was rough. Was she moaning? Did she whine? No. (She drank wine, but that’s different altogether.) Was she sliding around on the slick floor? Did she fall on the stairs? None of these happened.

If I wasn’t her friend, she wouldn’t have said anything. But, sometimes I’d get a “blasted hip” or some other under-the-breath comment. Did the people in the restaurant know what a hot mess her joints were? No way! She’d sit there with horrible dull, never-ending pain, and act like a “normal” person on the outside. She wasn’t falling over. She didn’t randomly moan. She even masked her limp pretty well. She was slow to stand up, and took the stairs cautiously. If you watched closely you’d see it. Those are the only symptoms of pain you’d get. 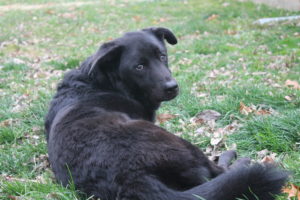 So why do people say “My dog isn’t in pain. I never hear him whimper or cry”?

Newsflash – your dog will, most likely, die before he whimpers or cries from his arthritis or other chronic pain. It’s not how they are wired. It’s not their M.O. Vocalization is not, and has never been, a reliable indicator of anything.

Do dogs scream and cry at times? Absolutely! Anyone who’s trimmed the nails of a drama-queen type dog has heard it, and lived to tell. Were they hurt? No! OK, their feelings were hurt, but in terms of true pain, the screaming for a nail trim is primarily performance. And some dogs deserve an Oscar!

True story: I was working in a large clinic, and a dog who was hit by a car was carried through the waiting room. His leg was barely attached. He was whisked back to the treatment area and a colleague of mine was treating him. Meanwhile, another dog came in for vaccines and a nail trim. He was also taken back to the treatment area for his nail trim. And oh yes, he was a screamer…more like a song, actually. The people in the waiting room became upset. They saw a dog who had suffered severe trauma go by, and minutes later heard screaming and carrying on. Is someone helping that poor dog? Aren’t they giving it pain medication? Someone do something!

When I explained that the dog who was hit by the car was silently being treated in the back, and the wailing and serenading was from a nail trim, the clients were at first skeptical, but eventually relieved. Then Blarney, the mini-poodle who sings throughout every nail trim, pranced out the door. His owners knew his nail trim routine, and had not seen the other dog come in. They had no idea what all the fuss was about! Everyone learned a valuable lesson – dogs in severe, non-emotional pain are often silent.

Will a dog yelp for a sharp pain – like if you step on their foot? Of course! Do you yelp when you stub your toe? Yes…and possibly with colorful words. Do you lay on the ground and moan for an hour afterwards? Hopefully not. You move on, albeit in a slightly worse mood.

So, in terms of the chronic, “is my old dog suffering” kind of pain, don’t wait for a moan or a cry. He’s hiding it as well as he can. What do you look for then? You love your dog and want to help him if he is hurting! Here are some signs your dog is hurting:

When your dog is sitting and wants to lie down or stand, is there a delay? Does he think about it for a little, then do it? Is it very slow, and deliberate? Does he ever fail and have to make a second attempt? Arthritis, or pain in a joint, can cause symptoms like this. Most people’s mind immediately jumps to hips, but knees, lower back, and elbows are just as common causes of chronic pain in dogs! 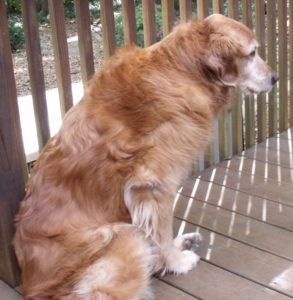 When a dog has chronic pain in a joint, she won’t move that limb through a full range of motion. When muscles are not used, they shrink (the medical term is “atrophy”). It’s literally “use it or lose it” with muscles. With muscle loss comes weakness. To boot, some elderly dogs also develop nerve disease as they age as well. This causes a loss of coordination. How does it look to an owner? A dog who can stand up from sitting when on carpet, but slips and slides on a slick floor. These dogs often walk very gingerly across the slick floors, and will seek out carpet every chance they get! Also, when a dog is in pain, the lack of range of motion makes the gait small and stiff, further making walking on slick floors difficult.

Panting when not exercising or hot

Yes, panting can be a symptom of fever, anxiety, heart or lung disease, high blood pressure, but importantly, it is a big sign of pain. Ironically, dogs who are panting are sometimes perceived as “smiling” which is often the opposite of what your dog is actually feeling! I have many patients whose only signal something hurt was panting while at rest.

Reluctance to jump or climb stairs

This is related to the slipping on floors. Did your dog use to sit next to you on the couch? Does he hesitate at the bottom of the stairs? Is getting into the car no longer an option? He’s not altering these patterns because he doesn’t like you, or hates the new decor of the upstairs. Doing these things hurt, and they hurt so bad, he can’t fake it. Further, remember the muscle loss from lack of use? Well, if you’re weak and unsure of your legs, are you going to bound up the stairs? Dogs are smart and don’t want to do something they aren’t very confident about. Stopping these activities is an obvious red flag. Look for hesitation though – he might still do the activity, but has to think about it, or psych himself up for it first. Again, he wants to fake it, so by the time he flat out refuses to accomplish these tasks, the pain has become severe and likely chronic.

Shifting weight or even limping

OK, limping is an obvious one. Your dog isn’t hobbling around because 3 legs is the new trend. Something hurts. A more subtle, yet related symptom, is shifting weight. When a dog has pain in multiple limbs, they can’t decide which leg hurts the least. So they’ll put weight on one side, and when the pain becomes unbearable, silently shift to the other.

This can be a symptom of a million different things, but pain is on the list. Mouth pain is higher up on that list. If your dog has an infected or cracked tooth, that could hurt. Realize that dogs do have to eat to live, so a dog that is “eating fine” is not without mouth pain! I see many dogs with teeth rotting out of their head, puss spewing from their mouths, and the owners say the dog “eats fine.” Well, starving to death sucks, so what choice do they have? Most often, they are swallowing it whole. Some dogs can have pain elsewhere in their bodies that make them just lose their appetite. So again, it’s not a specific symptom by any means, but a good head’s up.

This is another one that might not be pain at all! Some dogs will lick (often a front leg) so much that they develop a raised area of scar tissue in one area. This is called a lick granuloma. The pain-induced licking is usually not that extreme. Things to look for are staining of the fur brown (from saliva – it’s not blood!) or even hair loss. If it’s over a joint, there’s a big red flag!

When I hurt, I am not the funniest person in the room. So when a dog is hurting constantly, he may be crabby, even snappy. This is particularly the case with children, who may want to pet the dog, or god forbid, sit on or jump on the dog, causing him even more pain. Obviously, teaching your children to respect the dog is the number one step here. But a change in personality can indicate pain, particularly if one part of the body seems “guarded.”

I would be remiss if I did not address dementia here as well. As dogs age, they can develop a disorder similar to Alzheimer’s disease in people. Some call it “doggy dementia.” The technical term is “cognitive dysfunction.” Click here for the whole article on cognitive dysfunction. Some of the symptoms can overlap with the symptoms for pain, like irritability, loss of appetite, change in behaviors, etc. It’s important that you talk to your veterinarian so she can sort it out. One symptom of cognitive dysfunction is increased vocalization (like a lowering of inhibitions). These vocalizations are often associated with confusion, and are not reliable indicators of pain. They are still important symptoms! Cognitive Dysfunction greatly affects a dog’s quality of life, and, even though it isn’t “pain,” it can make a dog downright unhappy.