On of my dogs eats worms from the sidewalk.  My other dog will drink water from a puddle, no matter how sketch. And then there’s dogs eating rabbit poop… Spring is so fun!

Dogs love to eat gross things… yet we still love them. Sometimes, though, we wonder “will that hurt you? How aggressively should I fight this?”
When should you get that gross thing out of their mouth, and when can you just turn your head and try not to think about it? Here’s the top three most common scenarios for this time of year.

1- Worms
Dried and crispy, fresh and slimey, or partially decayed. ALL are amazing if you ask my dachshund. After careful debate of if he should eat it or roll in it, he snatches it up and slurps it like spaghetti. I gave up. Worms won’t make them sick. Truth be told, after about the first 20 worms, I might start to intervene, because too much of anything can potentially cause an upset tummy. Has he ever been sick from it? Nope!

2 – Rabbit poop
Another solid one for the great “eat it or roll in it” debate. You can’t lose! Eating rabbit poop is generally harmless. There is a parasite that rabbits get that they poop out and can pass on to dogs called Eimeria. It’s a type of coccidia. Thing is, it cannot infect dogs, it just passes through. But if we see Eimeria in a fecal test, your dogs dirty secret will be out! 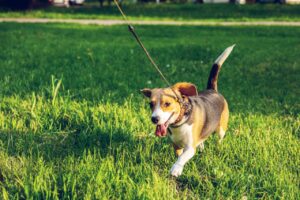 Photo by Artem Beliaikin from Pexels

3 – Random puddles of water
On walks, my chihuahua mix will drink out of ANYTHING. This gets me worried at times. My main concern is potentially toxic chemicals from farm fields or golf courses, so if the water drains from there, I’d avoid letting a dog drink it. Puddles that drain from parking lots and have an oily sheen – also not cool. Then there are the “clean” puddles in a park or natural area – probably less scary in terms of toxins, but then we have infectious agents like giardia or leptospirosis that are possible. The most common is giardia, and the textbook case is the dog that has diarrhea since he drank out of a mud puddle. It’s easy to treat, but easier to just avoid. However, on a hot day, if my girl is insisting she needs a drink, I just pick the least gross puddle possible and let her have at it. So far so good. If I were a good pet parent I’d carry water with us, but for a walk less than a mile, seems a little overkill – I think exploring puddles is more about fun than thirst sometimes. Still, you want to exercise some caution here.