Getting the phone call from your vet telling you your pet has giardia can be un-nerving.  If your dog or cat has had diarrhea, this is the likely explanation. If it was a routine fecal test on a healthy pet, however, the diagnosis of giardia can be a bit of a surprise. Most vets are not overly concerned in the majority of these cases – what gives? Let’s start with a brief history of poop testing….roll with me here.

Once upon a time, the way all of us vets tested poop for parasites was a process called “fecal flotation”. We would mix the poop with a specific solution that was made to a very specific concentration and density of sugar or salt. This would cause any parasite eggs to float to the top. After 15 minutes or so, we’d look at that top layer under a microscope and see who we found.

It’s not a bad test (we used it for decades!), but things can be missed. If an animal has a LOT of giardia swimming around, we could see those, but these animals with only a few would show up negative.

In the early 2000’s, a new technique was catching on across the country called “fecal centrifugation.” This technique was a lot more sensitive than the passive flotation. Separating the different layers of density in a centrifuge caused us to find many more parasites that we were previously missing! So most clinics have since switched over to the centrifugation technique, and for good reason.

One of the side effects of this switch: All of the sudden, we were getting all these poop sample results that were positive for Giardia! Was there a nationwide outbreak of giardia going on? Of course not. This was giardia that was always out there…we just never saw it! The more sensitive test revealed what had been there all along!

Many debates ensued – what to do with these fecal tests that are positive for giardia, but the pet has formed stools and is 100% NOT symptomatic? Do you treat? When you retest and they still have it, then what? Is it ever OK to not treat? Some debates became heated. We veterinarians can be passionate about poop, what can I say! We’ve since learned that some animals (cats more than dogs) have giardia happily living among their normal intestinal flora. It never causes problems, and no matter how much you treat, it never goes away because, for some reason, that particular animal’s body likes it there! 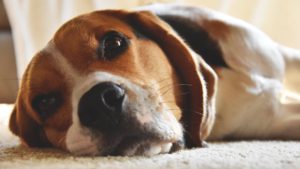 So how does this story affect your pet? What on earth is giardia and why do you care? For starters, giardia is a parasite that is not a worm like most other intestinal parasites. Instead, it is a flagellate, meaning it is a tiny organism (like one cell!) that has a flagellum, or tail. I think they look like a balloon on a string. Giardia organisms like to use that tail to swim, and when we are examining the feces under the microscope, we’ll commonly see them moving around!

Giardia is best known for causing diarrhea. And yes, people can get it too! However, there are many sub-types of giardia, and the types that infect dogs and cats are not the same ones that infect people. There is a lot of debate among veterinarians and parasitologists if giardia can truly be passed from pets to people. If so, it’s more likely to involve a person who has an immune system that isn’t top notch, like a person with HIV, someone going through chemo, or small children. The majority of the population is generally not considered at risk for getting giardia from their pets….especially if they use common sense like washing hands after cleaning litter boxes, etc. People are more likely to get giardia from drinking contaminated water, not from their pets.

Fortunately, the parasite is easily treatable. The most common medications are metronidazole (usually in pill form, but often VERY bitter tasting) or fenbendazole (a neutral tasting liquid or powder). Your veterinarian will decide which is best for your dog or cat, and might even choose both!

Can animals be treated then reinfected? Yes. The most common reason for reinfection is either a litter box that is contaminated with giardia cysts, or the animals fur having cysts stuck around their rear ends. For this reason, cleaning the litter box, or cleaning up the yard as best you can, will help avoid reinfection. Additionally, bathing the butt (which we usually do with diarrhea anyways, simply out of necessity) can help eliminate the giardia cysts from the home environment.

Most cases of giardia come from a dog or cat drinking stagnant water, like a puddle in a field. They might get some loose stool, the fecal centrifugation test shows giardia, and your veterinarian prescribes a treatment that usually lasts 5-7 days. The majority of patients simply resolve, and life goes on!