We’ve all seen ads online for various joint supplements that claim they transformed a dog’s life, bringing it from barely mobile to running and playing in the yard. The mainstay of these is often two common ingredients: glucosamine and chondroitin. It is often alleged that they help treat arthritis pain. Arthritis, and therefore, pain, involve the cartilage in the joint becoming inflamed, damaged, and even destroyed. The operating theory of these ingredients is that they help support/stabilize/strengthen the cartilage in the joint, thereby reducing pain.

If you don’t want to read this whole article, here’s the bottom line. Glucosamine/chondroitin supplements might be helpful in young dogs with joint disease or injury. We are not focused on managing pain (the disease is in early stages and pain is minimal at this point), but instead focused on protecting the cartilage from worsening over time. Old, painful dogs with advanced arthritis won’t benefit as much – they don’t have much cartilage to protect. These dogs need appropriate pain management, and these supplements are relatively ineffective at managing pain. So it’s more of a preventative supplement than reactionary treatment once the arthritis has progressed.

Now read on for the facts and studies – it’s actually interesting!

First, research studies tend to involve mice, rats, or dogs. Some also horses, but very few include cats. (Why is it cats are always an afterthought in medicine it seems?) In terms of absorption, both glucosamine and chondroitin are in fact absorbed when taken orally, and they do enter the blood stream and end up in the joint cartilage. The level of absorption and tissue distribution is debated. Earlier studies utilizing now out-of-date technology showed impressive absorption, but modern, more accurate studies show that, while these ingredients are absorbed intestinally and end up in the joint cartilage, it’s not to the level once thought. This may explain why glucosamine/ chondroitin supplements were all the rage decades ago when they first came out, and have died down a little bit. (If you want a good review of the molecular aspects of arthritis development and the role glucosamine and chondroitin potentially play on a cellular level, this paper is concise and good.)

The majority of studies are on cartilage cells in the lab, not in animals. Those are a great start, don’t get me wrong! In fact, it’s where scientific discoveries start (and was my field before I became a vet!). However, glucosamine and chondroitin helping stabilize cells in a culture dish, or decrease inflammation in culture cells, doesn’t mean it helps when ingested or injected into an animal, since there’s obviously a lot more factors at play. There is an abundance of in vitro research out there, readily searchable online, but I’m focusing on the clinical studies where the supplement was given to actual animals, just like you would give your pet. 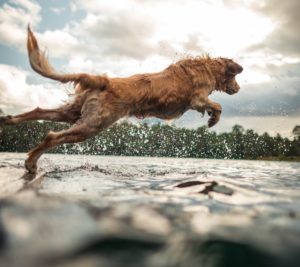 It’s been demonstrated that glucosamine and chondroitin individually are not all that effective, but achieve their greatest effects when used in combination. Therefore, most studies, and most supplements for sale for that matter, contain both ingredients as kind of a bonded pair – can’t have one without the other! Most of clinical studies compare glucosamine/chondroitin-containing supplements (again, there’s often other ingredients too!) to NSAID’s (Non-Steroidal Anti-Inflammatory Drugs), like Rimadyl (carprofen), Metacam (meloxicam), etc. We know these NSAID drugs are highly effective at reducing joint pain and inflammation, and it’s asking a lot of a supplement to even compare to them! If you want nitty-gritty, here’s a fantastic, although very in-depth, review article that covers many of the clinical studies done on dogs given glucosamine/chondroitin-containing supplements. I’m covering the four main studies here.

Another study we commonly see referenced is McCarthy et al 2007. They divided 35 dogs into two groups. One group got a glucosamine/chondroitin containing supplement, the other got carprofen. This study had no placebo, but went on 70 days (a tad longer than the one above). They tested for joint mobility and lameness, which did not improve on the supplement, but did improve on the carprofen. Again, the determination of improvement had a largely subjective component, but the design was randomized and double blinded (meaning the vet examining the dog did not know which group it was in). That’s a good thing.

D’Altilio et al 2007 added an extra ingredient – undenatured collagen. They had four groups of dogs: glucosamine/chondroitin alone, glucosamine/chondroitin with the collagen, the collagen alone, and of course placebo. Again, the way to determine improvement was subjective, such as improvement in mobility, decrease in limping, etc. The study went on for 120 days, followed by a 30 day withdrawal period (stopped the supplement). Interestingly, only the glucosamine/chondroitin group with the addition of the collagen showed a statistically significant reduction in pain. (The other three groups showed no major improvements.) However, the pain-relieving benefit was lost after stopping the supplement for 30 days, indicating, like most  meds, it works better if you keep taking it.

Gupta et al 2012 really got my hopes up when they did a study where they tried to take the subjective assessment out of determining the results. They used a force plate to measure how much weight a dog was bearing on each limb, along with the traditional subjective measures of joint motion, pain after exercise, etc. They also didn’t try to compare glucosamine/chondroitin to an NSAID, but instead compared to placebo. They ran the study for 150 days, so much longer than the others. Dogs in the placebo group showed no improvement in any of the tests. Interestingly, the dogs in the glucosamine/chondroitin group did show improvement on the subjective assessments (activity level, pain on range of motion, etc) but did not show improvement on the objective test (the force plate). Bummer. 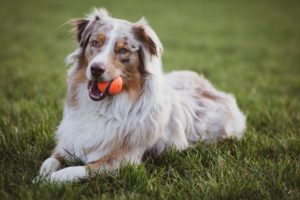 OK, so there’s four studies showing that glucosamine/chondroitin isn’t so hot at reducing pain as a stand-alone product. However, what about protecting the cartilage? There’s hope for that!

One study showing these supplements were beneficial and possibly protective came from Italy (here it is). The study only had 13 dogs (teeny tiny), and such a small sample size makes us wonder if the findings would hold up on a larger scale. The dogs were having surgery for a torn cruciate ligament in the knee. The procedure, called TPLO, is perhaps the most common treatment for ligament tears in dogs. Half the dogs in the study were given a supplement, and half were not. The supplement used was made in Italy (remember, Italian study) but many similar ones are available here in the US. It contained Glucosamine hydrochloride, Chondroitin sulfate, quercitin, Vitamin E, Omega fatty acids (trace amounts), and N-palmitoyl-d-glucosamine (a quasi-proprietary ingredient to this particular product). Dogs receiving the supplement had less inflammatory markers in the their joint fluids, and scored slightly better on lameness scores after surgery. They suggest that by reducing inflammation in the joint, future damage and arthritis may be avoided. This would be a big deal in dogs having knee surgery, as they all develop arthritis later in life, no matter how well the surgery went. Again, the study was very small, the supplement a little unique, but interesting nonetheless.

OK, so is it safe? Overall, safety studies in dogs, horses, and cats that have been given extremely high doses of various combinations of glucosamine and chondroitin with little to no ill effect. There is some theoretical intervention between glucosamine, chondroitin, and the body’s ability to clot. I know some veterinarians who suggest abstaining from these supplements prior to a major surgery, in theory to avoid excessive bleeding. Again, this is a precaution, and nothing has been proven of this link, but more of a “better safe than sorry” approach.

So if it might help and is safe, I have many owners opting to give glucosamine/chondroitin-containing supplements to their pets with joint issues. If it’s a financial hardship, I have people skip it and focus on the pain relieving drugs. I also emphasize that it might help protect the cartilage, but for dogs in pain it is not acceptable to give only this for pain management. Every study involved dogs with mild-to-moderate arthritis, and the majority of my patients are severe. The dogs I like to have on these supplements are the young dogs who have bad hips, had knee surgery, or some other joint badness, and we’re not so much managing pain as trying to keep the cartilage healthy for the future.

Also, there’s the whole “what else is in there” we need to address, as many modern joint supplements have a respectable list of active ingredients, hoping for an additive effect. Some of these are purported to be more effective than glucosamine/chondroitin! We’ll cover other ingredients in future articles.