We all have heard that dogs are color-blind. Is it true? Not exactly. Kinda like the myth that one human year is equivalent to 7 “dog years”. Again, not exactly.

So how well can dogs and cats see? In some ways, their vision is better than ours, and in others, it’s worse.

Let’s start with color, the one most people think about. We all learned about rods and cones in high school biology. These are cells in the back of the eye that have specific jobs for vision. Rods are good at detecting motion, and seeing things in low light (night vision). Cones work best in daylight, and are responsible for color vision.

Compared to humans, dogs and cats have more rods and less cones. That translates to seeing better at night (especially cats!) and not seeing color so well. Their vision may actually be better in low light as opposed to daylight! But how color deficient are they?

Dogs tend to be red-green color-blind, meaning green, yellow, orange, and reds may look similar. However, they can distinguish blue objects, although blue and grey may look similar too. And it varies dog to dog. I had a dachshund who was obsessed with orange. I could have two identical toys, with the only difference being the color, and he would want the orange toy 100% of the time. 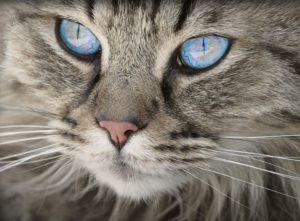 Yet, another of my dogs favored blue toys. That makes sense, given that they can see blue differently than many other colors.

What about cats? We aren’t so sure about those. (Really, are we sure about anything in cats?). Research suggests cats are similar to dogs in terms of color vision, and we do know their night vision is superior to dogs and humans.

Yet, when it comes to peripheral vision, dogs have the widest field of view. This does vary based on breed, because peripheral vision relates somewhat to the placement of the eye in the skull. Think about a pug’s eyes, as opposed to a collie – obviously a big difference there! Dogs average 245 degrees of visual field, while cats are around 200 degrees, and humans are in last place with 180 degrees.

OK, but if we’re all looking forward, how does our vision compare? I would love to know how researchers tested for this. Are there kitty eye charts with mice facing various direction, and he points? However it was determined, we know that dogs and cats both tend to be near-sighted. If they were people, they would need glasses for driving, but not for reading. Perfect vision for a human is 20/20. Dogs tend to vary, but many breeds see about 20/75. Meanwhile cats, although we aren’t entirely sure, tend to see about 20/100 – or worse! Remember all of these are for daylight vision. At night, or in low light, visual acuity improves drastically for both dogs and cats!

And yes, vision can be affected (worsened) by age. Lenticular sclerosis is a common aging change in dogs. It’s what causes the eyes to look cloudy, and many people think it’s cataracts. They are close – it is the same structure of the eye being affected. The difference is cataracts can eliminate vision entirely (and can be removed) while neither applies to lenticular sclerosis.