Yes, we all know we don’t want our dogs to get heartworm. If you have a good vet, she probably tells you to keep your dog on heartworm preventative every month. You get your dog tested for heartworm every year, it’s always negative, and it’s easy to get lackadaisical.

This week I had an experience with heartworm that brought the message home. These are not something to be messed with!

I’m not going to go into the heartworm life cycle in detail, but for review, here is a great synopsis from the American Heartworm Society. Here’s a summary of “typical” heartworm treatment.

Now that you’re a pro, time for our story.

I took in a middle-aged chihuahua lady from a rural animal control. They contacted me because she had a large tumor on her belly, and no rescue would take her. I agreed to take her and help her out. The first thing I do when I bring in a new dog is get a heartworm test. Hers was a very strong positive. Crappy, but not the end of the world. I’ve treated many dogs for heartworm. It’s expensive, it sucks, but it’s doable.

It was a Friday afternoon that I brought her home. I named her Frida, after the Mexican painter, because, well, she is a Chihuahua, and she seemed like a strong lady. Even though she never coughed, and acted quite spry, her heart sounded abnormal when I listened with my stethoscope, so I planned on chest x-rays ASAP the next week.

Saturday I started her on doxycycline, the antibiotic that weakens the heartworms by killing a parasite they carry. Standard heartworm treatment protocol is to give doxycycline for the first month. This eliminates the parasite (called Wohlbachia, if you’re curious), which slows maturation of the worm larvae, and may even kill some larval stages. It’s a good start to the worm-killing. 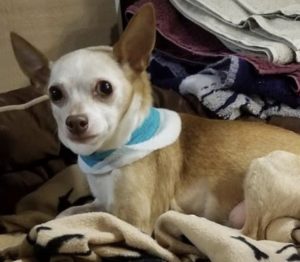 Monday I called the clinic I work with to see when was a good time to get her in for chest x-rays. It was a typical crazy Monday (for both sides), so Tuesday worked best with both of our schedules. I tested her urine for protein, an indicator of severe heartworm complications. The test looked good, so I worried a little less. Then Monday night she stopped eating.

Tuesday morning she threw up. Still seemed perky, wanting love, but wouldn’t eat. Even though I had just done a full blood panel on her Friday, I drew blood again. On Friday, there were some mild changes in her blood, and one liver enzyme was a little high, so I wanted to see what was going on. Turns out her liver was angrier.

Tuesday afternoon I got the x-rays. We could see her lungs were affected by the heartworms, her pulmonary artery was very swollen, and her heart was mis-shapen. I checked her abdomen for fluid with ultrasound – no fluid, thankfully (that would have been a sign of severe complications). Her liver looked unremarkable on ultrasound as well. Tuesday night she started coughing and became lethargic.

First thing Wednesday morning I called the local cardiologist. She was booked for the next 3 weeks. I told the receptionist I had a very sick dog, (and I am a referring veterinarian, which helped!) and I emailed her the x-rays. The cardiologist called me late that afternoon and agreed to work her in first thing Thursday morning.

Thursday morning we arrived at the cardiologist. Realize I have not even had this dog a week yet! The technician ushered me to the back for an ultrasound of Frida’s heart. It was bad.

This might sound like common sense, but small dogs have small hearts, and big dogs have big hearts. Heartworms are the same size no matter whose heart they are occupying/destroying. These worms look like thin spaghetti, and adults are 10 inches long. You read that right. Imagine several worms, almost a foot long each, having to fit inside a heart the size of an egg. No wonder it was bad.

So we know heartworms live in the pulmonary artery. We know a chihuahua’s heart is small (roughly the size of an egg), and we have worms that are 10 inches long. This is not good math. Her pulmonary artery could only hold a worm or two, and they all coiled around themselves. This means the worms back up into the right ventricle. Guess what, that was full too! They then backed up into the right atrium, and were extending into her vena cava! With her heart jam packed with worms, it’s a wonder any blood got through at all!

When I listened to her heart with a stethoscope, I could hear a delay in the closing of the valves on the right side. They were so tangled up with worms, they were doing their best to keep up, but the physical obstruction of the worms prevented them from closing all the way. 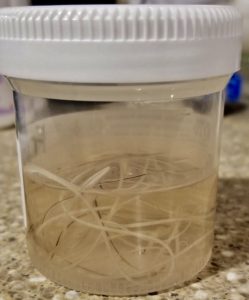 Frida had caval syndrome, meaning her heartworm infestation was so severe, the worms were preventing blood from leaving the vena cava and entering her heart. Dogs with caval syndrome usually die within 48 hours. We had to act quickly.

The only treatment option was to remove the worms. Right then. Killing the worms would not help (and actually makes it worse). The heart doesn’t care if the worms are dead or alive at this point. A worm blocking blood flow is a worm blocking blood. With her heart being so small, it only took a handful of long worms to coil up and fill the chambers, preventing the valves from closing, and not leaving room for blood to move.

Frida was whisked back for the emergency procedure. Because her heart was so compromised, general anesthesia would have likely been fatal. Instead, she had sedation and a local anesthetic. A hole was cut into her jugular vein (in the neck). The cardiologist used an instrument similar to an alligator clip at the end of a long wire. She fed it down the vein, into the vena cava, then the heart, and one by one, pulled out the long worms. It is a tedious process.

Once the worms are removed (Frida had SEVEN!) the vein is sewn back up, a pressure wrap is placed around the neck, and she is woken up.

When I brought Frida home that night, her heart sounded normal. Already! The next day she was back to begging for treats and asking for tummy rubs. Quick actions are what saved her life.

Frida is not out of the woods. The adult heartworms were removed, so her heart can function again. However, there are immature worms still floating around her blood and in her heart. These are too tiny to grab with a forceps, and the heartworm preventative won’t kill them. So we’ll still have to continue the doxycyline for a month. After a couple months, we’ll have to go through the “usual” heartworm treatment of one shot in the back, wait a month, then 2 more shots in the back. She needs to be kept quiet this whole time.

So next time you think “heartworms, how boring” think again! Frida’s case was an extreme case, and we hope no dog has to go through that. Keep your dog on the preventative every single month. It’s so simple! Having the worms extracted will cost you $2,500-$4,000! Heartworm preventative for her size is less than $10 a month.