This week we have a great example of policy catching up to science!

Every year or so, a group of experts in the field convenes and updates the Compendium of Animal Rabies Prevention and Control. They are the ones making recommendations on what action is required in terms of vaccination against rabies, as well as suspected exposures. Their main job is keeping the American public safe from a virus that is (thankfully) rare, but fatal.

The guidelines used to be the following:

If a dog or cat has a tangle with a questionable raccoon, skunk, groundhog, bat, or any other animal which would be a rabies suspect, certain steps had to be followed. If the pet was current on his or her rabies shot, then it would be given a booster shot and monitored at home for 45 days. After that, they would be examined by a veterinarian who would sign the form saying they are a nice dog or cat and don’t have rabies (assuming they didn’t). 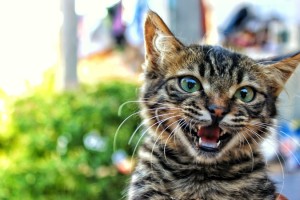 If your pet was ONE day overdue for his rabies shot when the encounter with the not-so-nice animal occurred, they were treated as animals who were never vaccinated. You were given two choices: euthanasia (so a sample of brain tissue can be tested for rabies), OR 6 month quarantine in an approved facility (costing thousands of dollars). Both of these truly suck.

The new guidelines are so much better!

If your dog or cat had a rabies vaccine in the past, but are overdue, they can now be treated as the pets who are current on vaccinations. That means they’ll get a booster shot and sent home for 45 days of monitoring. Why the dramatic policy change? We’ve long suspected that rabies vaccinations (most pet vaccinations, actually) last much longer than the one or three years they are labeled for. Seriously, did we think something magic happened at midnight of the 366th day after they got the one-year rabies shot? Scientists have now shown that the duration of immunity for rabies vaccination extends beyond what we once thought.

So does that mean you give your pets one rabies shot and they are set for life? No. Sorry. Remember, rabies vaccinations are required by law, and your municipality or state may have its own additional rules regarding animals rabies vaccinations and licensing. Also, the guidelines for animals who are accused of biting people are still the same. If your pet’s rabies shot is not current and your pet bites, or is accused of biting, a person, you could encounter fines or other penalties, depending on your jurisdiction. It’s always best to keep your pet current – you’ll just have to bring them back to your vet after 10 days so they can sign the form that your pet is healthy.

And, to be thorough, the guidelines improved slightly for those animals with NO history of getting a rabies vaccine who have an encounter with a rabid animal. It used to be a 6 month quarantine in an approved facility, (or euthanasia) and that time has been reduced to four months. It’s still not great, but a slight improvement.

Moral of the story – vaccinate your pet against rabies to keep life simple. But if it does slip, it won’t be a potentially life-ending event like it used to be!