Indoor only cats are very rarely exposed to other diseases. So how is it that your cat was healthy last week, and suddenly seems to have a cold? One word – herpes. (Technically called FHV, or Feline Herpesvirus-1)

No, your cat hasn’t been sneaking out, meeting other cats. In fact, 90% of cats in this country have herpes. The virus is similar to the chicken-pox virus in people: the majority of the population has had it, and once it’s in your body, it never leaves.

That’s good news when you bring home a kitten with an upper respiratory infection. (They are not all caused by herpes, but the majority are). The question people immediately ask – is my other cat going to get it? If the virus causing the kitten to sneeze is herpes, then your cat will probably be fine if they ar 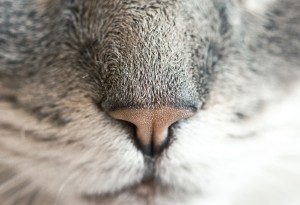 e just living in the same house. He has his own herpes already, just like the kid who already had chicken pox. We don’t always know when it’s herpes though (unfortunately, there is no great test for it) so it’s best to keep the sick kitten away from everyone else, just to be safe.

Thankfully, chicken pox in humans stays dormant, or hidden, for decades. It can rise up later in life as shingles, but you don’t have a lifetime of “chicken pox flare-ups.” Cats aren’t so lucky. Many cats have herpes as a kitten, and never deal with it again. They are the lucky ones. Some cats, however, experience flare-ups of the disease every time their immune system is even mildly suppressed. What suppresses a cat’s immune system? Stress.

It doesn’t need to be stress we can see. Remember, we’re talking about cat psychology here. (Sometimes I wonder why I try!) Did you rearrange the furniture for the Christmas tree? Is there a new cat outside that your cat watches through the window (and may feel threatened by)? Did you move the litter box, or change the litter? Stress in a cat’s mind is not always the obvious moving-new baby-new cat situations we think of right away.

So your cat is winking at you, sneezing, and may even have some eye boogers. Many times, these flare-ups resolve on their own. If the sneezes or eye discharge become colored yellow or green, that means bacteria might have set up house in your cat, and he might need an antibiotic. Rarely do cats with herpes needs antibiotics though. Why? Antibiotics treat bacteria. Herpes is a virus, not a bacterium. It laughs at antibiotics. 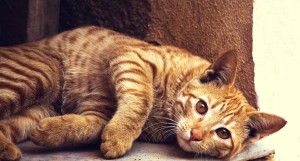 We vets used to have people feed lysine to their herpes cats. It comes in flavored versions made for cats, or even off the vitamin shelf in the grocery store (to clarify, the human versions are often not chicken flavored). Lysine is an amino acid – the lego brick in a protein castle, if you will. It was long suspected that lysine somehow inhibited the growth of the herpes virus in cats. Recent studies have come out, however, debunking that. The official word is that lysine is not helpful. Does it hurt? No. if you think it worked for your cat, then continue using it as your vet instructed. If you were thinking the lysine was kinda lame and not all that helpful…..apparently, so does the rest of the world now.

What can you do then? There are antiviral medications available from your veterinarian. Unfortunately, many eye drops can sting upon application. And remember, stress makes herpes worse. If you’re chasing your cat through the house and fighting to medicate him every few hours, it’s negating any benefits of the drug, more likely!

Often, herpes flare-ups resolve on their own with no medical intervention (well, until the next flare-up). This particularly applies to cats who sneeze, but are energetic, eating, and drinking just fine. Some cats do well with anti-viral therapy, and others may even develop secondary bacterial infections, earning them an antibiotic. If your cat is easy to medicate, it may be worth talking to your vet about possible anti-viral options.

Once you know your cat is a “herpes cat” your best treatment is prevention. Try to keep stress to a minimum. Easier said than done, I know! Some useful anti-stress treatments may include prescription diets to reduce anxiety, Feliway (a pheromone demonstrated to reduce anxiety), and some even go so far as to do prescription anti-depressants (think kitty-prozac). Best though, is peace of mind. Knowing your cat is a “herpes cat,” you’ll avoid panicking when your cat wakes up one morning winking at you and sneezing.

Of course, if your cat is lethargic, not eating, throwing up, or just acting sick, there could be more going on. Always a good idea to have your vet take a peek. If your vet says it’s herpes, now you’ll know what she means.