Many businesses use ice melt or salt to keep the walkways safe.

Homeowners often use it on the sidewalks in front of their houses.

Pet owners often want to use ice melt, but fear harming their pets.

What gives? There are “pet-safe” ice melts being sold. Are they really safer, or is it hype? Little of both. 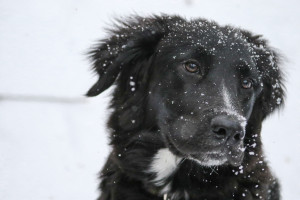 If your dog has sensitive paws (like a chronic disease), or is known to eat everything on the ground, then regular ice melt presents a minor hazard. What’s in regular ice melt? Usually calcium chloride or sodium chloride (yup, that would be good ol’ table salt!). If ingested in decent quantities, any salt can be considered a deadly toxin. So again, don’t let your dog munch out of the bag (common sense, really). These salts can be irritating to paws, particularly if in a large quantity (ie it gets less spread around and more dumped in piles). Small amounts spread thinly are usually well tolerated by most dogs. Still, if you’re going to pile it on in a place your dog frequently walks, it’s best to buck up for the salt-free, “pet-safe” alternatives.

The active ingredient in many “pet-safe” ice melts is urea. This is non-toxic for dogs and cats to eat (ironically, the digestive tracts of goats and cows turns it into a toxin, so keep it away from your farm animals!). Urea can cause an upset tummy and vomiting, so I would avoid letting the dog snack out of the bag. However, is it not considered a poison. Urea is also less irritating to paws, although animals with extremely sensitive paws standing in an inch of the stuff may disagree.

So how concerned should you be when you are walking your dog, and walk across some unknown ice melt on the sidewalk? Unless your dog has extremely sensitive paws (like a skin disease of the paws), you’ll be OK as long as you use some common sense. (For starters, don’t let your dog eat a bunch of it!)

1- After the walk, clean your dogs paws with water, nothing fancy!
2-Make sure to clean both paw pads and the area/fur between the pads.
3-Do not let your dog lick his or her feet until after you’ve cleaned them well. A couple licks won’t be the end of the world, but if they make a project out of it you could have an upset tummy.
4-If your dog has lots of fur on the bottoms of his or her feet, keeping it trimmed could save you a lot of headache!
5-Make sure to dry the paws after cleaning them.

Yes, the salts in traditional, “non-pet-safe” ice melts are potentially toxic. If your dog gets into the bucket and eats cups of it, you will end up at the emergency clinic. But let’s keep perspective. Any casual contact, followed by gentle paw cleaning if you’re worried, is often sufficient to keep your dog safe. (Here’s a secret – I’ve worked at many vet clinics who used traditional ice melt in the parking lot, and no one ever had problems.)