Animal lovers cheered when many states enacted tougher laws against animal abuse. For instance, here in IL, the law officially bans leaving a pet exposed in “extreme weather.” All 50 states have laws like this, making it a misdemeanor to leave an animal outside with insufficient shelter. In Massachusetts and Oklahoma, sometimes it can even be a felony!

In reality though, what does this mean?

Not to be a buzz-kill. Yes, it is a move in the right direction, and I’m very happy these laws are being enacted! However, it’s not the perfect solution. Why?

For starters, the laws are often vague. What are “extreme” conditions?  What is “sufficient shelter”? Every person has a different definition of that. And, to be honest, it probably varies by breed! Think about a Siberian Husky or Alaskan Malamute. They are bred to be in snow. The Iditarod dogs live in the snow 24/7 sometimes! Yes, those dogs are bred, trained, and conditioned for that lifestyle. Still, you might have a tough sell with a husky that is left outside in your neighborhood (in the winter – summer is a whole different story for those breeds!).

However, a small dog, like a dachshund or chihuahua, cannot handle cold temperatures well at all! So the 20 degree snowy day that the husky’s love is sheer torture to a short-haired dog.

Here’s another bummer part of the laws and their subjective nature – if there is a doghouse, it is often legal. That drives a lot of pet owners crazy. Thing is, it has to be a sufficient dog house. So the board leaning against the shed that your high-quality neighbors call a “dog house” is not legal suitable housing, but the old doghouse with a couple holes…..that’s a grey area.

A lot of these subjective aspects of the law depend on the law enforcement officer’s perception. So find the most animal friendly one on the payroll – they’re more likely to help 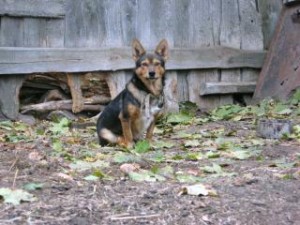 What to do if you see a dog in these situations? You need to make the job of helping this dog, or even prosecuting this case, as easy for the authorities as possible! Document document document! Try to keep emotions out of it (easier said than done, I totally get it!). Saying “they are so horrible to that dog” is not helpful.

What documentation do they need?

Photos are nice, especially if you have a zoom lens and can take photos without entering the property. Don’t risk getting arrested (or even shot) for a photo – let the police or humane investigators do that. Now that you have the facts (and you can do this in anywhere from a matter of hours to days, to weeks, if this is a chronic case you are battling) then call the police or sheriff’s office. If you are fortunate enough to have a very active humane organization in your area, or if your police have any kind of animal cruelty task force (those are the words for your google search), find them. Give them your evidence (again, facts, not emotion), then follow up on if the case is being pursued, and if you can be of any further assistance. If it is a non-profit local humane organization (ASPCA, Humane Society, etc) consider making a donation – those people don’t work for free (although their salaries are very low), and most of those groups survive on donations!

So yes, this sounds like some work. And it takes courage! But you might be that dog’s only hope that the suffering will stop. Sometimes dogs are confiscated and the owner prosecuted. Sometimes it’s a slap on the wrist. Sometimes the owners buy a cheesy doghouse and make it legal – and there’s nothing you can do about it.

An idea – sometimes people honestly have no idea they are abusing or neglecting an animal. Mental or physical illness often play a role. Job loss, deaths in family, who knows. I’ve often approached people, asked if they wanted the dog, and offered to help. Many times they won’t give it up right away, but plant the seed (and yes, it’s sickening to hear people claim how much they loooove that dog. Smile and nod). Some people are truly sick and there is no talking to them – don’t get yourself shot or arrested in the process. Others are truly overwhelmed by their current situation, and the offer of a person taking the dog to a better place is welcomed!

Kindness sometimes can do wonders! If you’re met with resistance, than head to the authorities. Again, it can be scary, and takes guts, but doing the right thing, and helping the helpless often does.

That dog will thank you.