Having a pet you thought was healthy suddenly become life-threateningly ill, or even unexpectedly die, is probably the worst thing a pet owner can experience. Part of it is shock – how did this happen so suddenly? Part of it is the guilt, feeling like you missed something you should have noticed. Would your pet be alive if you were a better owner? We beat ourselves up with the “I can’t believe I missed this” which makes the stress of the illness or loss even worse.

This article is to tell you that you are not alone, and nothing you could have done/not done would have likely changed the outcome. Some diseases hide under the radar, and don’t show up until it’s too late. Here’s actual stories of veterinarians this has happened to with their own pets. So yes, if it can happen to a trained, experienced veterinarian, it can happen to anyone.We do are best, but sometimes what’s going on in the body is more cunning, more stealthy. No one could possibly know.

It’s heartbreaking, and infuriating. But it’s more common than you think. It can happen to anyone. Here’s three stories.

Stan had been a practicing veterinarian for 39 years when this happened. He’d seen it all. Elly was a German Shepherd, and he knew very well the laundry list of diseases this breed is prone to. One morning he fed Elly, and everything seemed normal. Then he noticed she had left THREE pieces of kibble in her dish. She was enjoying her time in the yard before he left for work, and seemed as perky as ever. When she came in, he gave her a second look. He noticed her belly was distended.

Being an experienced veterinarian, he knew this was likely a tumor in her abdomen that was bleeding. German Shepherds are one of the breeds that’s prone to this cancer. Sure enough the ultrasound showed a large mass on her spleen, as well as masses in her liver. This dog who acted healthy the day before was now bleeding to death internally, and had cancer (hemangiosarcoma) spreading throughout her body.

The only sign anything was wrong was the 3 pieces of dog food she left in her bowl. Not much of a symptom! By this point, the cancer had already spread, making her a less ideal candidate for surgery and chemotherapy. Even with aggressive treatment, Elly could hope to have 3-6 months. And she acted completely fine the day before.

Rachel and I went to vet school together. We’d been out of school about 10 years when this happened. She had a cat named Flour (long story) who was found as a stray kitten. Flour seemed healthy. She had perfect bloodwork, completely normal physical exam, and appeared to be a normal, healthy cat. 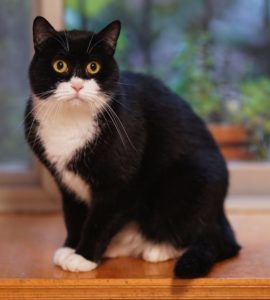 One day, Rachel came home from work and found her 9-year-old cat dead. Obviously, she was traumatized. She had no idea what could have happened (the other cats in the house were all fine) and there was no visible sign of any trauma or anything. We performed a necropsy (like an autopsy, but on a cat) and discovered Flour had a type of heart disease that cats get called HCM – Hypertrophic CardioMyopathy. There’s a large genetic component to this, so there was nothing that could have been done to prevent the cat from developing the disease. If we are able to diagnose this disease in a cat, there is a no cure, but we can manage the disease to help the heart last longer if we find it early enough.

In Flour’s case, we suspect a blood clot developed from the blood not circulating properly (due to the heart disease), and lodged itself in a fatal area (like lung or brain). She never had a heart murmur, her heard sounded completely normal with a stethoscope, so Rachel never had a reason to x-ray her chest (probably wouldn’t show up anyway) or ultrasound her heart. She had undergone anesthesia for her spay uneventfully – there were no signs of brewing trouble!

Tracy was a couple years behind me in vet school. She had golden retrievers her whole life. She knows they are “cancer factories” as we call it. Well, she was NOT going to let any cancer sneak up on her! Starting at age 5, Abby had full bloodwork, x-rays, and an abdominal ultrasound performed by a specialist every 6 months. If it was brewing, Tracy’s goal was to find it early and beat it.

Well, cancer doesn’t play by any rules. Abby had a fever in May. She was 9 years old. It was a month before her every 6-month workup, so Tracy did the blood tests and ultrasound a little early. This time there were some tiny nodules on Abby’s liver. So she had the radiology specialist performing the ultrasound collect a fine needle aspirate (we vets hate treating our own pets). He basically poked the liver with a needle (like what we use for vaccines) and collected some cells. She sent the cell sample to a specialist in pathology, who determined it to be a normal aging change and did not see any cancer. Abby’s fever went away the next day, and we all were happy.

In September Abby developed some red spots on her skin. They were filled with blood. Abby’s bloodwork was STILL 100% normal and perfect at that time. Still, Tracy knew something was not right. She had another ultrasound performed and found Abby’s abdomen FULL of cancer that had started on her spleen. No surgery could fix this. The cancer won, despite Tracy’s dedication to finding it early and beating it.

This article isn’t meant to be scary (although it kinda is) or depressing (OK, it is that too). My point was to show how some diseases are just evil. No matter how good of a pet owner you are, no matter how much you know, or how proactive you want to be, you can’t always find everything early, and we can’t always win. I hate it.

I wrote this to hopefully give comfort. If you experienced a similar shock, first accept that it was not your fault. It happens to veterinarians for crying out loud! Stop reliving every moment, or questioning every move. While knowing that hopefully helps you stop beating yourself up, nothing can heal the loss of losing a pet suddenly. Please know that someone understands what it’s like, the hurt is real, and I am sorry. Many of us have been through it despite our best efforts.