One of the most common diseases in cats that veterinarians see is Upper Respiratory Infections (URI). These most commonly affect kittens, but many adult cats experience symptoms as well. Symptoms include sneezing (sometimes really juicy ones) along with one or both eyes being infected (conjunctivitis). Some cats even get so congested they don’t want to eat.

There are many infectious agents that can cause upper respiratory infections in cats, both viral and bacterial. The most scary (and thankfully not all that common) virus is calicivirus, which also causes very high fevers, pneumonia, and ulcerations in the mouth…and can be fatal. Other not-so-common causes are bacteria called Chlamydia or Mycoplasma. These typically infect the eyes more than the nose and sinuses, and are treated with antibiotics.

By far the most common cause of URI’s in cats is herpesvirus. Yes, you’ve probably heard of herpes. It can present in people as an STD that you learned about in high school, but the most common form of herpesvirus infecting people is the varicella virus, which causes chicken pox and shingles.

As you may know, a person cannot get shingles if they never had chicken pox. How does this work? When a person gets chicken pox, the herpesvirus (called Varicella zoster) initially makes them sick, but then sticks around long after the symptoms of chicken pox resolve. The virus never really goes away, it just goes into hiding, with the immune system keeping it in line. Later in life, when a person’s immune system becomes compromised for any reason (stress, sickness, medications, etc), the virus flares up in the form of shingles.

The herpes that infects cats behaves in a similar fashion. Many cats get the “kitten head cold” when they are young. This is most commonly caused by herpes (there are other less common causes I already mentioned). In fact, one study showed 85% of cats in this country have a herpesvirus in their system!

But your cat is an adult. Why did he suddenly start sneezing? Or why is one of his eyes constantly goopy? This is very likely the herpesvirus flaring up. Some cats just can’t seem to keep the virus in check, and have symptoms their whole lives, usually in the form of a squinty eye. Thankfully, these are not very common. What we typically see is a cat who’s showed no symptoms for years, then suddenly gets a cold. Where did this come from? 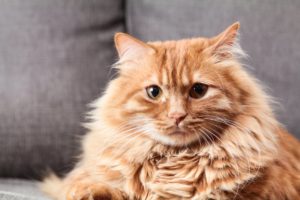 Any stress in a cat’s life can suppress the immune system enough that the herpesvirus that’s been hiding for years can wake up. Classic examples of triggers would be moving, a new baby, or a new pet entering the home. However, these are cats we’re talking about, and things that can stress them may seem like nothing to us. Is there a cat in the neighborhood your cat sees out the window? Did you move some furniture around for the Christmas tree? Did you move a bed or cat tree? In a cat’s mind, these can be very stressful! Any one of these, or something we don’t even think about, can cause enough stress to produce a flare-up.

Some cats are very prone to flare-ups throughout life, and have a lower threshold, while others might experience an upper respiratory infection as a kitten and it never comes back! There’s no way to predict which will happen in a particular cat. Often these flare-ups self-resolve once the immune system kicks in, but other times they need help in the form of medication or supplements.

For many cats who are frequent offenders and seem to have flare-ups often, whether it’s sneezing or runny eyes, many veterinarians recommend supplementing with lysine. For decades, veterinarians have been suggesting “herpes cats” receive this supplement. But what is it? And can it help?

Lysine is an amino acid. There are 20 different kinds of amino acids, and these molecules joined in various combinations are what make up protein. So lysine is not a drug, but a supplement. For decades it was thought to slow the growth of the herpesvirus in the cat, as well as reduce the level of virus being shed in tears or nasal secretions. But does it really help?

There have been a few small studies of cats with herpes:

This 2003 study only had 14 cats. They deduced that lysine did not improve clinical signs, but may have reduced the shedding of the virus in secretions and tears.

This 2015 study only had 8 cats. They thought the lysine supplementation improved the conjunctivitis (eye inflammation) in the cats, but didn’t seem to affect the amount of virus in secretions

So here are two studies with some conflicting results…what gives?

Then came the big controversy. A virologist (not a veterinarian) read all seven studies that had been published on cats with URI’s and lysine. He then wrote his own paper and deduced that lysine had no effect on herpes-related URI’s, and said no one should use it. Seems a little extreme, and caused a bit of a stir in the veterinary world.

That caused this article to be written in a veterinary business journal, sharing both sides of the story. Veterinarians have used this supplement for decades, and suddenly saying it is useless seemed a little strange.

So what’s the deal? Can lysine slow down the growth of the herpesvirus in cats like we thought? Or was it bunk? There’s still conflicting evidence. On one hand we have thousands of pet owners swearing it helps their cat. We also have veterinarians who have used it and observed an improvement in either ocular or nasal symptoms. Is it the lysine working? Is it the placebo effect? Or was this the normal cycle of the herpesvirus and we just gave lysine all the credit?

I still prescribe it to patients. I was taught in vet school it helped. Maybe it’s an urban legend like other things I was taught that have since been disproven. However, if the lysine is easy to give, it can only help, and cannot harm the cat in any way. If it helps a little, what have you got to lose?