Nothing is more scary than waking up one day to see your senior dog walking in circles, head tilted to the side. Sometimes these dogs won’t eat, or will even be throwing up. You’re thinking it’s the end. The symptoms present like a stroke would be in a person, and you know those are bad.

Breathe easy – strokes in dogs are exceedingly rare. I won’t say it never happens, but it isn’t the most likely problem, at all! And you most likely will NOT be putting your dog to sleep like many people think!

The most common cause of these symptoms in an older dog is something called Vestibular syndrome. Yes, it looks awful, and it’s freaking the whole family out to see your poor old dog unable to walk in a straight line. Your dog isn’t loving life either, but don’t panic!

Spoiler alert- many dogs recover from these episodes with little or no treatment in a matter of days!

So what is going on? For reasons that no one yet knows (many theories abound, but none proven), the vestibular apparatus in the dog’s brain becomes inflamed (often temporarily).

What is the vestibular apparatus? Think of it as the part of the brain that tells you which way is up. It’s located near the inner ear, and is the part that gets mad when you are on a rough boat ride and feel seasick. In dogs, this area gets incredibly inflamed (again, no one knows the cause, which is why we call the disease idiopathic) causing the dog to feel like the room is spinning, and no matter how far they tilt their head, things just don’t look right. These dogs will often walk in a circle in the direction of the head tilt, if they can walk. Some dogs get so motion sick they are actually nauseous and vomiting! (again, think boat ride from hell.) 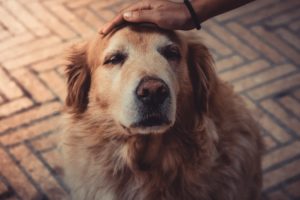 Yes, other diseases can cause these symptoms too, such as a deep inner ear infection, or a brain tumor, so it’s important to check with your veterinarian before attempting an internet-based diagnosis. However, vestibular syndrome is by far the most common. One tell-tale symptom is something called nystagmus. This is a motion of the eyes with them rapidly moving side to side. This motion, along with the head tilt and circling, and the rest of our physical exam, is often enough for us vets to get an empirical diagnosis.

What can we do to help these poor dogs? OK, it often gets better in a couple days, but this could be a loooong couple days. Most often, we treat the symptoms. We can give meclizine or dramamine to help combat the motion sickness. For dogs that are vomiting, your veterinarian can give a shot and/or prescribe medications to keep food down. In severe cases, I’ve hospitalized these dogs, simply because they need help eating, and aren’t coordinated enough to drink water (too busy tilting their head to the side), so we put them on IV fluids to keep them hydrated.

Sometimes we will prescribe an anti-inflammatory (steroid) to help, but many factors play into this decision, including other medications your dog is on, and any other health problems.

In the majority of cases, in 1-4 days, your dog seems to somewhat spontaneously return to normal! Some dogs experience relapses later in life, but many do not. Again, there’s a lot we don’t know about this disease. Still, for as terrifying as the symptoms are, it’s amazing to think you can have your old dog back to normal in a matter of days, so don’t panic!