Baxter is a 4 year old lab mix who had torn a ligament in his knee called the ACL. This is a common injury, unfortunately, and surgery is often required to restore function to the leg. (Here’s my article on ACL tears). Baxter’s mom loves him, so she was willing to pay over $3,000 to have his knee surgically repaired, and take on the bigger challenge of the subsequent weeks of confinement.

After the surgery, Baxter would need to be confined for 8 weeks. That’s a long time to have a dog not walk around more than to go outside and potty! The orthopedic surgeon recommended that Baxter’s mom reduce the amount of food he was fed by about 25%. This is because he would not be getting exercise, and she did not want him to gain weight. Truth be told, Baxter was a bit on the plump side to start. With any orthopedic surgery, the less weight the leg has to support, the better. So Baxter needed to lose some weight, and would not be exercising – that’s a bad combination!

Baxter’s mom understood that he needed to not gain any weight, and ideally would lose some. She decided to do one better than to decrease his regular food. She figured buying a weight-loss food would really help her buddy – a great idea!

She had planned on buying the same food that Baxter had been on for years and liked, just the weight control version of it. She asked me, her regular veterinarian, and I told her I thought that was an awesome idea. He was on a good brand of food, so the weight loss version of the same brand would be an easier switch than a whole new food altogether.

So, off to the pet store she went!

As she studied the shelves, with the vast array of foods, she was trying to decide if she should get weight control, or a large breed weight control, and what the difference was. That’s a great detail to look into, and the options can be overwhelming! As she stood there reading a bag, she was approached by a man who asked her if she needed help. A trusting person, Baxter’s mom asked which food she should feed, and told the man her situation with Baxter’s knee and the surgery.

This is where the bamboozle started.

This man was a salesperson for a pet food company. They sometimes lurk in the aisles of a pet food store, generously offering to “help” stressed out dog owners pick a food for their dog. Some identify themselves as working for a company, but many do not. Some even try to come off as an employee of the store. 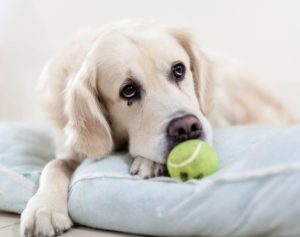 Upon hearing her questions, this dishonest man told her that the food she was feeding was not the best for her dog. He led her over to an aisle of “organic”, “holistic,” and “grain free” dog foods. He convinced her that the natural ingredients would help her dog recover from surgery better. She bought a bag of natural, holistic, grain-free food and went home, thinking she had done a good thing.

I did not learn of her experience until I came to recheck Baxter six weeks after his surgery. When I walked in, I could tell from across the room he had gained some serious weight, and when I put him on the scale, he had gained 11 lbs! So much for losing weight! This poor dog had gone from 64lbs to 75 lbs!

I asked if he had gotten more treats (it’s easy to feel sorry for your dog when he can’t exercise). She said no, and she was surprised he had gained so much. She really was being good about not over-feeding him. Then suddenly her face changed. I saw the lightbulb in her head go off.

I was confused. There was never a new food in the plan. She was going to buy the weight control version of the food he had done so well on throughout his life. That’s when she told me the story about the man approaching her in the store, and she told me about the food she bought.

“I can’t believe I am so stupid!” she bemoaned, melting into the chair. I assured her that it wasn’t her fault, and this could have happened to anyone!

Instead of buying the food she planned, which would have helped poor chubby Baxter recover from his surgery, she believed a rather convincing but ill-informed and self-promoting stranger. Baxter paid the price. Now we’re trying to get the extra weight off poor Baxter so he can walk better, and thanks to that salesman, he has an even harder journey ahead of him.

There is nothing magic about “natural”, “holistic,” or “Grain-free” food. In fact, I personally despise grain-free dog food, because it is very high in calorie, and causes problems like we saw in Baxter. (It also has been linked to heart failure in dogs.)

So if you go to the store to buy dog food and someone tries to sell you a different food, think of how Baxter’s mom got bamboozled, and walk away. The salesperson has no interest in your pet, only in making a sale and profiting off you. Pet store employees are given a script to recite, and a certain brand to push. They don’t care about what your pet needs, they have to sell their product.

This is a true story, and similar versions are likely playing out in pet stores across the country every day. Please be aware of these predatory practices and know to stand your ground. Buy what you came to buy! Don’t be bamboozled like Baxter’s mom. And never trust the “helpful” stranger who approaches you – they are only helping themselves.