Whenever I have a patient that I suspect Addison’s disease in, I always sigh and dread having to explain it. Why? The disease is not straight-forward, can have many forms, and can imitate other disease, making a simple explanation impossible. I’ll try to cover it as reasonably as possible…this might be long and kinda boring though. I’ll do my best.

In its “classic” form, Addison’s disease is the result of the adrenal glands not doing their job. (The schmancy word is hypoadrenocorticism). Most people think of “adrenaline rush” when they think adrenal gland, and that’s true. However, the adrenal glands are responsible for more than the rush of energy. Believe it or not, the adrenal glands need to secrete many hormones in small steady doses throughout the day just to maintain normal body functions.

The two main categories of these hormones the adrenal glands produce are glucocorticoids and mineralocorticoids. (They produce other hormones as well, but those are not involved in Addison’s disease). Glucocorticoids include “adrenaline” type hormones, and the one we typically measure in the lab is called cortisol. Cortisol can rise during stress (like your adrenaline would), but low levels produced daily are important for maintaining the digestive tract and blood pressure. Excess cortisol causes cushings disease and results in, among other things, high blood pressure. Conversely, insufficient cortisol production (as in Addison’s disease) tends to show up in the digestive tract, in terms of bleeding ulcers, diarrhea, vomiting, inappetence, or any combination thereof.

The other hormone category, mineralocorticoids, are important for maintaining sodium and potassium balance. This may not sound like a big deal, but potassium levels that are too high or low can cause life-threatening heart problems, as well as muscular and nerve problems. Pets with insufficient mineralocorticoid production (Addison’s disease) often have high potassium levels.

When I was in vet school, we were taught that Addison’s disease was diagnosed by an animal with insufficient cortisol production (from the lack of glucocorticoids) and elevated potassium (from the lack of mineralocorticoids). We then were taught that there are types of Addison’s called “Atypical Addison’s” where one category of hormone is fine, and only one is deficient. So a dog can have normal cortisol, but elevated potassium. Or it can have normal electrolytes (fancy word for sodium and potassium) but insufficient cortisol production. In other words, they would only be deficient in one category of hormone.

Now, years later, we are discovering that these “Atypical” Addison’s cases are actually more common than typical… so what is regular Addison’s? Who knows! There are 3 types now, the typical and the two atypical, and we aren’t sure which to call “atypical” any more.

Diagnosing any version of Addison’s is tricky. Symptoms are usually vague, and may come and go. Dogs with insufficient cortisol typically show signs of poor appetite or vomiting. However, these dog may do well one week, be sick the next, miraculously recover and then be fine again. That’s what makes the disease so frustrating and hard to diagnose. Dogs with insufficient mineralocorticoids may have no symptoms until they get super sick and essentially collapse one day!

On bloodwork, Addison’s can resemble kidney failure, so it’s important to sort those out. Dogs with major whipworm infestations can show abnormalities on bloodwork that look like Addison’s too. Also, some patterns in types of white blood cell (or lack of) may hint at Addisons. The waxing/waning digestive signs can mimic diseases like Irritable Bowel Syndrome. Or the dog might just feel crappy and we can’t put our finger on it. 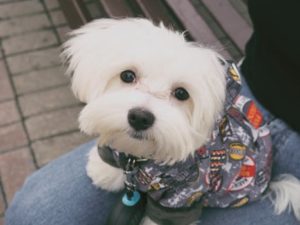 We used to consider Addison’s a disease of “little white dogs,” but we’re learning it affects any and every breed.

Once we start to suspect Addison’s on the routine blood panel, we’ll have to dig deeper. How do we diagnose Addison’s? The classic test is called an ACTH stim. Basically, we measure the cortisol level, then give an injection of a medication (usually Cortrosyn) that tells the adrenal glands “give me all ya got.” This causes the adrenals to produce all the cortisol they can, and we draw the blood 1-2 hours later to see how they did. Normal dogs will show a significant rise in cortisol levels after the shot. Dogs with Addison’s will not show any increase at all, or maybe only a tiny one – the adrenal glands simply are not capable of producing cortisol, no matter how hard they try!

Some dogs do not show signs until one day they crash – this is known as an Addisonian Crisis, and it is a crisis indeed. These dogs become very dehydrated, the potassium level gets super high, the blood pressure drops, digestive tract shuts down… very bad news. These dogs WILL die if not treated promptly, correctly, and aggressively. The good news is that with appropriate treatment, these dogs can go from looking like they are on death’s door to wagging their tail in a matter of hours! Treatment involves providing IV fluids, and providing the hormones the body needs but is not producing (cortisol and mineralocorticoids). If the body gets what it needs, it can recover! Once we get the diagnosis, these dogs in Addisonian crisis are actually very rewarding to treat, because their improvement can be so quick and drastic!

Thankfully most dogs with Addison’s are diagnosed before they have a crisis. How is it treated? Well, that depends on which flavor of Addison’s you are treating!

To address the lack of cortisol, we give steroids, usually dexamethasone (if in crisis) or prednisone (for daily use). We give tiny doses, since we are giving just enough to replace what they body should be making, but isn’t. These medications are inexpensive and easy to give. Interestingly, since we are supplying the body with its “adrenaline” that it cannot produce on its own, we will have owners give their pets a higher dose of steroid on stressful days – like boarding in a kennel, or having surgery. Since their adrenal glands can’t cause a little adrenaline rush, we’ll help them out! That increase in adrenaline during stress is actually necessary for the body systems to cope with the stress!

To address the electrolyte imbalance (the high potassium) from the mineralocorticoid deficiency, we have two choices. One is a pill, which is given daily and is VERY expensive, as most dogs take multiple pills a day. (My dog got 8 pills a day when she was on it). A better option, still also VERY expensive, is an injection given roughly every month. There are currently two brands out there – Percorten and Zycortal. When your dog is newly diagnosed, you’ll have to come in to have the electrolytes (sodium and potassium) checked mid-month, and again when due for the next shot. Once we know the right dose and interval, we don’t need to check every single time. I’ve had some patients who, after getting the shot monthly for a year, only needed the shot every 4 months or so, so it made checking the blood every so often worth it. (And no, I can’t explain how they got so lucky, since it typically doesn’t work that way, but we’ll take it!)

Dogs with classic Addison’s need treatment for both, while those with atypical-but-kinda-more-common-so-whatever-you-want-to-call-it Addison’s are treated for the deficiency they have, one or the other.

With appropriate treatment and monitoring, Addison’s is very treatable. It can be an expensive disease, but often does not shorten a dog’s life, nor affect the quality of life. Even though diagnosing it can be tricky, since it can look like SO many things, once we get the diagnosis and treatment going, life can go on.

So if your dog has symptoms that come and go, maybe associated with increased stress (gets sick when you leave for a week, better when you return), consider Addison’s disease as a possibility.

Any cookies that may not be particularly necessary for the website to function and is used specifically to collect user personal data via analytics, ads, other embedded contents are termed as non-necessary cookies. It is mandatory to procure user consent prior to running these cookies on your website.