I first became involved in rescuing dogs from puppy mills about 20 years ago. I made friends who had made friends with these breeders. When they had an older dog who wasn’t producing enough puppies to be profitable, it also wasn’t worth the price of food, or the price of a bullet. These puppy mills/breeders would give these dogs to rescue. They were often in very poor health, and emotionally even worse off. We’d teach them to trust people, slowly, and adopt them out once they were nursed back to health (as much as some could be!).

Another way to get dogs out of these horrible places is dog auctions. I had friends who would go bid for me. I knew better than to go – I would probably get myself arrested (not unheard of at these places) seeing these dogs being literally thrown into cages and drug across the dirt floor. I have amazing respect for the rescuers that can go to these auctions, witness the abuse, and calmly focus on the larger goal of saving lives.

It used to be that rescuers would try to be somewhat inconspicuous at these auctions. If you complained, or became upset at what you saw, you would be ejected. Some acting was involved in getting these poor dogs. They are typically held in Missouri, the puppy mill capital of the world. Missouri lawmakers are very “pro breeder” and have accommodated puppy mills by, among other things, creating a law making it illegal to photograph or video on any person’s property or farm without their consent. This works well to protect breeders/puppy mills from anyone documenting what they see. (Not that the laws to protect dogs in Missouri aren’t all that great, even if we could document it!) The standards are set so low on what is considered “humane” that many places deemed appalling by a normal pet owner are perfectly legal. 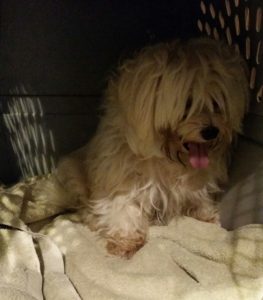 This law also applies to puppy mill auctions, which are, conveniently, held on private property. Rolling Stone magazine ran a superb article on puppy mills last year, and I consider it a must-read for every pet owner…every living human being, really. They discuss what dog auctions are like, so I won’t re-invent the wheel here. If you are not familiar with puppy mills and auctions, stop and read that article now!

A more recent article on dog auctions ran in the Washington Post, and discusses what I will be discussing here. Oddly, I had this article written about 4 months ago, but was waiting for the right time to publish it. Now that the Washington Post article is getting people talking, it’s a good time to contribute. We need to keep the conversation going.

My focus is actually on the rescues that attend these auctions. When I got involved 20 years ago (I need to quit saying that…I really do feel old now) the dog auctions were for young, profitable dogs. The auction house owners would not allow dogs over 5 years old to be placed up for bid….wasn’t worth their time. The older, worn out dogs were given away, or sold for $5 each, or 10 for $1. I think I paid $20 for an older dachshund once back then and thought “oh no!” The last thing we as rescuers, or just as decent human beings, want to do is financial support the commercial dog industry.

I wrote an article recently that ran in BARK magazine about how it’s dog lovers, the very people who are opposed to puppy mills, that are not only keeping the puppy mills in business, but causing them to thrive. Now rescues are making it worse.

Over the past few years, the puppy mill auctions have drastically changed. The rescuers are a known entity there, and are actually responsible for a large portion of the profits. Dogs that would have never been for sale, but would have been throw-aways, started selling for $200 or more. Sometimes rescues would inadvertently bid against other rescues, further lining the pockets of the abusers.

A recent auction showed how out of control this situation has become. A geriatric male dog with no teeth, who would have been free in the parking lot just a few years ago, sold for $1,700. I wish I was making this up. These puppy mills are making thousands of dollars from rescue organizations. It’s as profitable to sell worn out abused dogs to rescues as it is to sell puppies online. 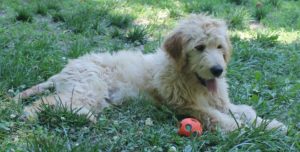 Mix breed from an auction. Mutts containing the word “oodle” often are sold for a premium.

So here were rescuers from far away, wearing “Don’t shop, adopt” clothing in a puppy mill auction…shopping! Granted, the stealth of being a rescue was lost many years ago, but being that brazen…just paint a target on your forehead. Why does it matter? The puppy mill auction house knows that rescuers bid with emotion. This is not a business of simply getting new breeding stock like it is for the breeders. They start prices high, and make them go higher. How can you say “Don’t shop, adopt” when you yourself are shopping? No need to be incognito – with this kind of spending, the auction company will roll out the red carpet for rescuers! Realize the auction houses typically collect an additional 10% of the cost of the dog. So for a single dog that sells for $5,000, the buyer pays an additional $500 to the auction company. With prices high, the auction company is making thousands of dollars each week!

This has dramatic effects down the line. Let’s say Joe puppy miller had been giving his worn out dogs to a rescuer. He’s heard about the high prices at auction, so he’s going to start taking them there rather than give them to rescue for free. Really, can you blame him? The rescues have created a whole new demand, in an industry where our only hope of closing it is eliminating the demand. Now puppy mills are producing dogs just for rescuers to buy at auction.

We need a movement to stop paying high prices for these dogs. Rescues that spend $40,000+ at an auction – what are you thinking? Your money is enabling the puppy mills to buy (and abuse) more dogs. Would you give an arsonist a lighter and complain he keeps setting fires?

I understand, rescues are saving those dogs, and giving them the wonderful life they deserve. I love rehabbing mill dogs, and I know how rewarding it is. However, we are in a cycle that will only expand. More puppy mills will breed more dogs to meet the demand of rescues willing to pay top dollar. So while 20 dogs are saved, the miller turns around and buys 30 more. These are the dogs we don’t see, so we can’t feel emotional like we can about the dogs who we are staring at in the cage.

We need a way for rescues across the country to be on the same page. We need to coordinate. We need to boycott dog auctions. Rescues have become the biggest enablers. “Saving” these dogs only means the millers now have more money. Rest assured that money will not go to food, shelter, or medical care for the dogs they have. They’ll buy a new truck instead.

If we continue supporting the auction industry, the breeders that do have a little bit of a heart, and give dogs to rescue, will stop this practice. Only the dogs suffer. Yes, it’s fun to say “look who I saved from a puppy mill!” The glory of rescue is great, and is needed to counteract the day-to-day frustration of rescue. But there has to be a better way. These rescues with large bank accounts are hurting thousands of dogs they’ve never known, and are feeding the puppy mill economy they claim they are trying to stop. I don’t have all the answers, but the direction we are currently headed is not going to decrease the number of dogs languishing in puppy mills every day.