There’s always something new coming out that is the next great thing to make your pet’s life better. Myths get perpetuated on social media like gospel truth. What’s real and what’s just hype?

Pheromones sure sound sketchy. What are they? A pheromone is a chemical secreted by the body that is emitted and detected by other individuals of the same species. Pheromones are a means of “silent communication” so to speak. They can be used to communicate such messages as danger, food, territory, desire to breed, or calming. They do not have a smell that we can detect, but are detected through nasal passages or organs in the mouth.

Scientists have figured out which chemicals communicate what message in a variety of species. They also created synthetic versions of these chemicals for production. For instance, cats will often rub their face and cheeks against an object (or person!). Why are they doing this? They are applying a pheromone to that surface that “marks” that object or pant leg as “theirs.” Once many objects in a house are claimed, they can relax, knowing they are in their own domain. With dogs, a pheromone has been discovered that nursing mother dogs emit. It has a calming effect on the puppies. Puppies that know mom is there will eat better, sleep better, and eliminate better. 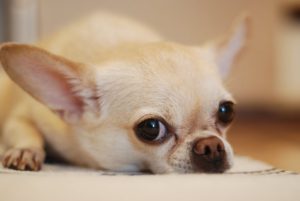 Companies have created these two pheromones (one for cats, one for dogs) for people to use at home to help reduce stress in their pets. So this is all well and good, but…really? I know, it sounds bogus. I was a huge skeptic when I first heard about them. It all sounds so abstract, and as a scientist, I need proof.

Well, there is proof! And it’s not the “my friend’s mom’s friend’s cousin says it works” kind of proof. Well designed, controlled, double blinded clinical studies have demonstrated an efficacy of >80% in 30 minutes for both the dog and cat versions. The original product was Feliway (for cats) and DAP, now called Adaptil, for dogs. They are still considered the “gold standard” by many veterinary behaviorists. Now other companies are coming out with their own versions.

These products come in a plug-in diffuser (think room air freshener) that you can use in your house. Large houses take a few diffusers to cover the space, as one diffuser covers 600-800 square feet. They also come in spray, which you can apply to a bed, carrier, or, for dogs, a bandana you can spray and the dog wears. The spray lasts 24 hours or less, so it’s not an easy long term solution, more for situational needs. They also come in collars the pets wears, and are replaced monthly (as are the diffusers).

I recommend pheromones often. They have no side effects, no odor, and can only help. If it doesn’t help, worst thing that happens is you’re out about $40 depending on the product. Some of my cat owners swear by them for helping inter-cat aggression, or most commonly, urinating outside of the litter box. My dog owners have been pleased when using it for dogs with generalized anxiety, separation anxiety, or situations like thunderstorms and fireworks. These are just a few examples of potential applications.

So while it sounds mystical, the science behind pheromones is sound, and many veterinary behaviorists have been recommending them for years! If you have a cat urinating outside the litterbox, or a dog that can’t cope with you leaving, these alone will not fix the problem. However, when coupled with a positively based approach, can help speed along improvement.

Here’s my article on other effective OTC anxiety treatments for dogs and cats.