We’ve all seen the ads on TV. The older gentleman who repeatedly goes to the bathroom and has trouble urinating. The calming voiceover assures us this is all too common, and there is help for grampa. This disorder in men is caused by a prostate gland that becomes enlarged, and obstructs the urethra (the tube he urinates out of). It’s called BPH – Benign Prostatic Hypertrophy.

Dogs can get this too! We don’t see it all that often anymore, because most dogs are neutered. (It’s even more rare in cats). But, the pathology is similar. Over time (years – this is an old dog disease) the constant testosterone causes the prostate gland to enlarge. The syndrome is called BPH – Benign Prostatic Hypertrophy. Yes, it’s benign in terms of it not being cancer, but that does not mean it causes no problems! It is not at all painful. However, the location of the prostate is what makes this whole process problematic. 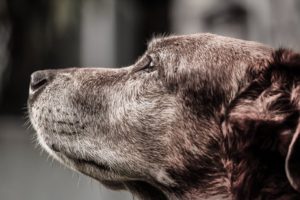 The urethra tunnels through the prostate on its way to the outside world. As the prostate enlarges it constricts the urethra, making it more difficult to urinate. We’ll often see dogs posturing to urinate and not much coming out, or it’s a dribble.

If you see these symptoms in your older, not-neutered male dog, then BPH may be a culprit. However, other diseases can exhibit these same symptoms, particularly bladder stones that have lodged in the urethra. An x-ray can help distinguish the two.

In dogs, this disease has an easy fix – and I mean “fix!” Neutering is the treatment of choice. No pills, no creams, no side effects! If you remove the source of the testosterone (ahem, the testicles) then the prostate shrinks back to its original size! It is not instantaneous, but happens over a couple weeks. (They just don’t seem to offer this option to humans…)

True story – I saw an old boxer dude who was having trouble urinating. It was so severe his bladder never emptied, and the urine was backing up into his kidneys, causing kidney failure! Putting him under anesthesia was not something we were excited about, but there were no other realistic treatment options. We were able to pass a catheter to empty the bladder (relief!) and neutered him. Soon, he was peeing on fire hydrants again with the best of ’em. Even better, the kidney levels on his blood test returned to normal! He ended up living another 2 years.

So next time you see the commercial on TV, think about the one disease that dogs have a more effective treatment than people!