By far the most common cause of limping every veterinarian sees in dogs is not hip dysplasia. Everyone who walks into a clinic with a dog hopping on three legs says “I think it’s his hip.”

It hardly ever is.

Hip dysplasia sucks, and is common, but does not normally cause an acute injury. It’s usually a slow, chronic pain that builds, slowly degrading your dog’s quality of life. Most people don’t recognize it in their dog until it’s quite advanced, unfortunately.

These suddenly painful dogs often have an injury to the knee. A ligament in the knee, called the cruciate ligament, is by far the most common culprit in a dog who goes outside fine and comes back in limping. A dog’s knee actually has two cruciate ligaments, which makes sense. “Cruciate” means cross, and you need two lines to form a cross shape.

High school biology time! Your knee (and your dog’s knee) is comprised of three main bones: The femur (the thigh bone), the patella (kneecap) and tibia (shin bone). There’s a small bone that runs next to the tibia called the fibula, but it doesn’t play a role in cruciate injury or repair. There are also two small, pea sized, kinda floating bones just behind the knee called fabellas, and those actually can play a role, depending on the type of surgery chosen.

There is an entire team of ligaments and tendons required to keep the knee moving properly, and the cruciate ligaments are just two. They are located actually inside the joint, between the femur and the tibia (thigh and shin bones, but you knew that!). In human medicine, one is termed “anterior”, the other is “posterior”. Those are fancy words from “front” and back” basically. In veterinary medicine, we use slightly different terminology, because our patients are standing on four feet, not upright like humans. So what is anterior in humans is considered cranial in animals. Posterior in the human world translates to caudal. Basically, cranial means “towards the head” and caudal refers to the back end.

Who cares? When you’re talking to your vet, your friends, googling it, etc, you may see both terms used. The Anterior or Cranial Cruciate Ligament may be referred to as ACL or CCL. If this term sounds familiar, you’ve probably followed football. Many American football players tear their ACL, and it can be a season-ending injury. If you’re googling about your dog, use the veterinary “Cranial Cruciate” term, or CCL. 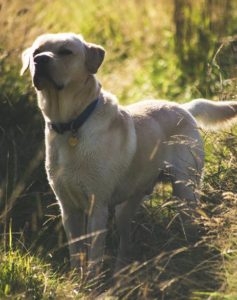 In addition to the cruciate ligaments inside the knee joint, there are two very important pillows inside the knee. These are the medial (on the side of the inner thigh) and lateral (the other side) meniscus. These keep the bones from rubbing on each other and causing pain, like little cushions. The medial meniscus often is injured when the cranial cruciate ligament is torn. So now things are more complicated, and painful!

Thankfully, the caudal/posterior cruciate ligament, or CCL (yep, both cranial and caudal are called CCL, kinda annoying), seems to never act up. The ACL (Cranial) is the problem child. It’s the one that ruins careers in sports, and can ruin several months for dogs and their owners!

How does this ligament tear? No, you don’t need to fall off a building or get hit by a car. It’s usually the seemingly innocuous every day activities. Chasing a squirrel, playing in the dog park, or running after the ball can all lead to a torn ACL.

But it isn’t the activity – it’s the dog! How is it that every other dog at the dog park plays and doesn’t go home limping? Some dogs have leg anatomy that makes them more prone to injuring the ACL. The angle where the femur meets the tibia causes more strain on the ligament, so it’s basically an accident waiting to happen. Bigger dogs tend to experience this injury much more frequently than small dogs, although I’ve seen it happen in all sizes.

Some breeds are genetically prone, labrador retrievers and newfoundlands in particular. Also, the more overweight the dog is, the harder life is on that poor tiny ligament. And because of these factors, dogs who rupture one ACL are very likely to rupture the other. Both knees are made the same, so it’s usually only a matter of time. The going rate is roughly 50% of dogs who rupture the ACL in one knee end up injuring the other knee. When I used to do this surgery, I had several patients come in limping on the other knee, when the hair from the surgery on the first knee hadn’t even grown back yet!

How do we diagnose an ACL tear? Well, any dog who comes in acutely limping on a rear leg with no history of trauma is considered an ACL tear until proven otherwise.

The veterinarian will perform a physical exam, and often feels swelling in the knee, which supports our suspicion. We sometimes can feel the diagnostic “drawer” motion on an awake dog, but ideally, every ACL suspect needs to be sedated and x-rayed. The sedation is just as important as the x-rays! When the dog is relaxed, and not holding that painful leg stiff, we can feel for the classical “drawer” motion your veterinarian probably told you about.

What is drawer motion? It’s named after, well, the motion of a dresser drawer. When you (or your dog) stand, the tibia should stay relatively in line under the femur. If the femur stays in place, but the tibia slides forward, like the tibia is a drawer opening, that is the drawer motion. In dogs with a completely torn ACL, the drawer motion can be extreme, the tibia “flapping in the breeze” as I’ll sometimes call it.

Another test we veterinarians sometimes do is tibial thrust, or tibial compression test. Similar theory as the drawer, but in this test we’ll manipulate the foot and ankle, and if the tibia slides forward, it’s evident there is no ligament there preventing that motion, and therefore the ACL/CCL is torn.

We take x-rays to evaluate swelling and arthritis in the knee. Ligaments do not show up on x-ray, so we won’t get the particular diagnosis from the pictures – that’s why we have to feel and manipulate the leg! X-rays are important for planning surgery, but even if surgery is not an option financially, x-rays tell us how the body is responding. It’s a good idea to get an image of the hips as well, so we can get an understanding of the pain or arthritis in the entire limb.

The ligament doesn’t always completely tear all the way through. Many times it tears or frays just a little. These injuries are just as painful, the main difference being the drawer motion is not as dramatic. These partial ACL tears often progress to become complete ACL tears – it’s only a matter of time.

True story – many years ago, I would diagnose a dog with a partial ACL tear and send them to the surgery specialist for a consult. The surgeon would send them back to me saying “we don’t cut partial tears, only full. Have them come back when it’s torn all the way.”OK, whatever dude. Then the economy tanked. Maybe a new study came out at the same time saying it’s best to go ahead and surgically repair these partial tears and not wait (which we now all think it is). Or maybe less people could afford surgery and specialists do need to stay in business like the rest of us. (Cynical much?) Regardless, the specialists all began to operate on the partially torn ACL ligaments right around that time! Honestly, the ones who benefited were the dogs.

With ACL tears being such a common injury, there are many different surgical techniques to address the problem. And not everyone can afford surgery, I get it. Far and away, surgery is the best option for your dog. Next I’ll have an article detailing the surgical options, as well as non-surgical options, for dogs with torn cruciate ligaments.