Years ago, there was a big hubbub about Greenies, the dental health chews that people give their dogs to help clean their teeth. Some dogs would apparently not follow the instructions, and rather than chew them, would simply swallow them whole or nearly whole. So much for helping their teeth!

Apparently those suckers did NOT dissolve in a dog’s digestive tract.

Many dogs needed surgical removal of the Greenies from their intestines. Owner were not pleased. Veterinarians were stressed. I doubt the dogs were enjoying it much either.

So Greenies responded with a new formula that came out a few years ago. It is a bendier chew, but still offers the chewing experience needed to help your dog’s teeth and gums. But if your dog decides to swallow it whole, it will dissolve easily by letting the digestive juices do their job, no surgery needed. 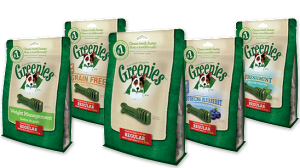 I had a personal experience with the new formulation of Greenies a couple years ago that proved these suckers do, in fact, dissolve!

A tiny, 4 lb dog swallowed his big brother’s Greenie. It didn’t even make it to the stomach! Instead, it sat in the esophagus, right above the stomach, which I am sure was very uncomfortable for the dog. I could see on x-ray the clump of Greenie stretching the esophagus to 3 times its size! I immediately told the owner to take the dog to a specialist up the road from where I was practicing. They had an endoscope, and could put the dog under anesthesia, reach down his throat, and pull out the Greenie. Easy peasy, right?

Well, when you send people to a specialist, they don’t always go.

The people chose to not go, for whatever reason (financial I assume), and the dog did not have the procedure. I called them a couple days later (not knowing they never went to where I sent them) to see how the dog was doing. The dog had been completely miserable for 48 hours, and unable to eat or drink. The owners did not understand the seriousness of this situation and chose to “give it time.” Well, apparently, over the course of 3 days, the Greenie dissolved, even in the esophagus, which lacks significant digestive juices! The dog was able to fully recover.

I was less than thrilled the dog had to unnecessarily suffer that long (and no one told us!). But I was very impressed at the dissolving ability of the new formulation of Greenies! The dog eventually recovered after one miserable weekend.

Here’s the article summarizing the research that University of Illinois performed on Greenies digestability.