When you find out your dog (or, in many cases, foster dog) is heartworm positive, you want to fix it! Let’s treat him and get rid of these heartworms! You know they can be deadly if not treated, so why wait? Then, when you learn how long the treatment takes, and we can’t start just killing worms right away, it’s a bit of a buzz kill.

Imagine water going through a 1/2 inch diameter pipe (artery). It flows freely if there’s nothing blocking it. Now put some spaghetti (heartworms) in that pipe. The more spaghetti, the more clogged the pipe gets. Does it matter if it’s cooked or uncooked spaghetti? Nope – either way you’ve got yourself one clogged pipe.

In terms of heartworm, whether the worms are dead or alive is irrelevant to the poor artery who’s just trying to pump blood with every beat. We have a clog, and there’s nowhere for the worms to go. Where do they go when they die?

That is the central problem. In very very severe cases, worms can be surgically extracted by a specialist. This is the small minority of dogs who can have this done, but it’s an option. The rest of us have to focus on “slow kill.” When a living things dies, it starts to decompose. Heartworms are no different. We have to give the body a chance to send in cells to digest and clean up the dying worm parts. This is literally happening, one. cell. at. a. time.

If the worms all die at once, we’ve made things worse! Now we have a clump of dead, decaying worms, which causes more irritation and inflammation to the poor artery that’s already clogged. Sometimes pieces of dead worm can break off and float into the blood vessels in the lung. This is what we are trying to avoid in heartworm treatment – pulmonary embolism. It can cause coughing, or it can be fatal. We vets like to avoid things that are fatal.

So we have to gradually kill the worms, to give the body a chance to clean up the debris. We also have to keep the dog resting to avoid increasing the heart rate. If she exercises and the heart really gets pumping, we’re more likely to have heartworm body parts end up in the lungs, blocking more vessels, causing massive inflammation, and possibly creating lifelong damage (assuming the dog lives). 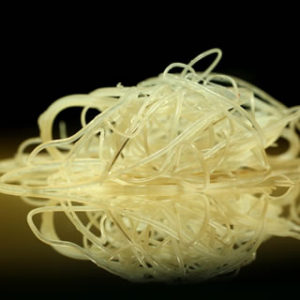 Here’s a breakdown of why we do the steps we do, and what makes it take so long. This is war, and there are many fronts, and many battles to be fought before we can declare victory!

Step one – kill the babies

War is ugly. We kill the babies first, so they don’t grow into adult worms. How do we do this? This is actually the easiest step – we give the dog a heartworm preventative! It must be one that has ivermectin in it, like Heartgard, Triheart, or Iverhart, to name a few. The way these preventatives work is by killing worm larvae (microfilariae) before they migrate to the heart and grow up. (Here’s the article about that). Once a dog is diagnosed, it must be given heartworm preventative every single month throughout treatment, and for life. Actually, every dog should get monthly preventative!

Step two – kill the parasites that the heartworms brought

War is complicated – parasites can have their own parasites. In this case, heartworms carry a bacteria called Wolbachia. It’s actually more of a symbiotic relationship, and the theory is these bacteria actually help the heartworms reproduce and stay alive. The bacteria also causes more inflammation within the blood vessels than just the worms do. We kill the bacteria with an antibiotic called doxycycline or minocycline, depending on your veterinarian’s preference (likely factors are cost and the weight of the dog!). Dogs are typically started on this right away, and it’s given for a month.

Step three – wait for the inflammation to calm down

Sometimes in war you have to step back and let things happen. This is the most torturous part for pet owners. We have to give the antibiotic for 30 days. Then we have to wait another 30 days for the inflammation to subside. Some worms that were weak may die just from having their bacteria friends taken away. We’ll give the body a chance to clean up these worms.

Nobody likes to be stuck in jail!

Step four – kill the young, the infirm, the weak

We’re finally on the battlefield of this war. This is finally the “heartworm treatment” most people think of – and the dog was diagnosed 2 months ago! We give an injection of a drug (called Immiticide, or melarsomine) that actually targets adult worms. This first injection kills off the older worms, those who were weakened by the antibiotic. It’s also a kick to the healthy worms, to wear them down a bit. This is the beginning of the phase where rest is absolutely critical. Some veterinarians will prescribe prednisone during this stage to, again, combat the inflammation from the worms dying. This decision is made based on how the dog is doing, and how far the disease has progressed based on chest x-rays.

Wars must end (thankfully!)- this one ends with a strike that wipes out everything that managed to survive this long. Those young healthy worms who were not killed by the treatment thus far have been weakened. At least 1 month after the initial shot, we give two shots on two consecutive days. This 1-2 punch kills off the adults who managed to hang around this far.

After the war, there’s clean-up. We must continue to keep the dog resting for one more month after the two-shot assault. More worms are dying, and we have to let them slowly degrade. After that, have your vet check him out to make sure he’s OK to ease back into regular activity.

Once you’ve made it through treatment, you want to know your dog is heartworm negative! Here’s a bummer. It takes 6 months for the body to clear out all the antigens that are detected on a heartworm test. If you do a test right after that last two shots, it will be positive. We have to have faith, and wait 6 months before we test – and then celebrate!