I am frequently asked to look at a pet’s ear because the owner noticed a discharge. Sometimes they will proudly say “…so I cleaned it with ______!” Often I find myself cringing. First, don’t clean it before the vet sees it – it’s like tampering with evidence (here’s my article on the importance of ear goo). Second, most things we use to clean a superficial cut are in no way meant to go inside an ear!

There are three things that people commonly use to clean a pet’s ears that have no business being in an ear! If in doubt, do nothing and call your vet. Here’s the three most common liquids people reach for to clean ears that should be avoided.

Yes, this is good for killing bacteria. Peroxide kills practically everything. That’s what makes it good. And very bad. Sure, it kills bacteria, but it also kills the poor cells that are trying to come and heal! In an ear, peroxide is especially dangerous. If the eardrum is ruptured (as often is the case with a moderate/severe ear infection) the peroxide can damage the super sensitive cells in the middle ear that are responsible for hearing! To boot, peroxide hurts. We have an ear that already is painful, so let’s not make it worse. The last thing we want is a pet who runs every time we reach for the ear – we need to keep some trust! 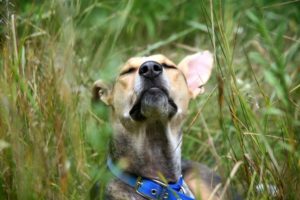 Any open areas in the ear canal will hurt when this is applied, just like the peroxide. And, alcohol has no ability to cut through waxy debris. You’re better off just wiping the ear with a dry paper towel than pouring alcohol into it! Also, like peroxide, if the eardrum is ruptured, you can do some damage to the middle ear (the hearing part!) by soaking it with alcohol. So it does not help, and can only hurt, which makes it one to avoid.

You may notice many over-the-counter ear cleaners contain alcohol. Most veterinary prescribed ear cleaners do NOT contain alcohol. Using a solution designed for ears that may contain a small amount of alcohol is currently being debated among veterinarians. Dermatology specialists across the country recommend using the cleaners that contain NO alcohol, while some general practitioners use products containing alcohol with no (obvious) ill effects. The main thing: alcohol is only one of several ingredients in these ear cleaners. NO ONE recommends just dumping rubbing alcohol into the ear. That is agreed upon!

This may come as a surprise! Will it hurt the pet? Not directly. Heck, they swim don’t they? Thing is, many ear infections are caused by yeast. Yeast loves water. So if your pet has a yeast/fungal infection in the ear, and you’re cleaning it with water, then you are basically fertilizing the yeast. The yeast is thanking you, but your pet is not!

So what can you use?