Any time a pet stops eating, it is cause for concern. However, vets become much more concerned when an overweight cat suddenly decides to go on a crash diet, or even get picky. Skinny cats, believe it or not, I worry less about when they stop eating than fat cats. Counter-intuitive, perhaps, because skinny cats have less to lose. It’s all the fat that the overweight cat has that causes problems. What is the big deal? 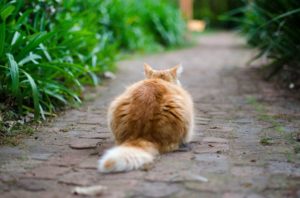 As many of you know, nothing is simple with a cat! When any animal goes without food, the body takes excess fat and sends it to the liver to convert it into energy. This system works well in most animals – except cats! Fat cats have plenty of fat stores for the body to metabolize, but when the fat is sent to the liver, the liver is unable to process all this fat as well as other species can. Turns out cats don’t have the same system most other animals have.

What happens? This fat builds up in the liver and can’t escape. Instead of getting made into energy, it just backs up. The cells in the liver (hepatocytes) get squished, causing injury or even death. Moreso, the pathways for bile in the liver become obstructed, so the bile can’t get out. That leads to one unhappy liver! The disease is fatal if not treated aggressively!

It takes time for this disease to develop. But again, cats are tricky! Many are grazers, or in multiple cat homes, how do we know who’s eating? Sometimes owners notice some weight loss, or more food in the bowl, over the course of several days. Later in the disease the cat can actually appear yellow, particularly the ear tips or the whites of the eyes. Some cats will vomit, others are just very lethargic. By the time you see these symptoms, you have one very sick cat! Treatment involves hospitalization on IV fluids, often for days, and may require the surgical placement of a feeding tube. Yes, this disease must be taken seriously!

Normal weight cats seem less prone to this disease, since they have less fat (raw materials) to start with. That’s not to say they can’t get it, but it is less common.

Bottom line – if your overweight cat suddenly loses weight or goes on a crash diet, he or she needs to be seen by a vet ASAP!