Last year, I came in contact with a dog who was pulled from animal control by a rescue group, and needed a foster home. Of course, I can’t turn down a homeless fluffy face, so agreed to foster him.
When we first met, Linus was more interested in sniffing his new surroundings than in meeting people or dogs.
Throughout the first week, we would all be playing ball in the yard, and he would sometimes collide with my other dogs. I thought they were just dogs not watching where they were going in the heat of the moment.
When he was lying on the floor, my husband would walk up and pet him, and Linus would jump up, snap, then run away. He sounded scared, although by husband insisted “he was looking right at me!” 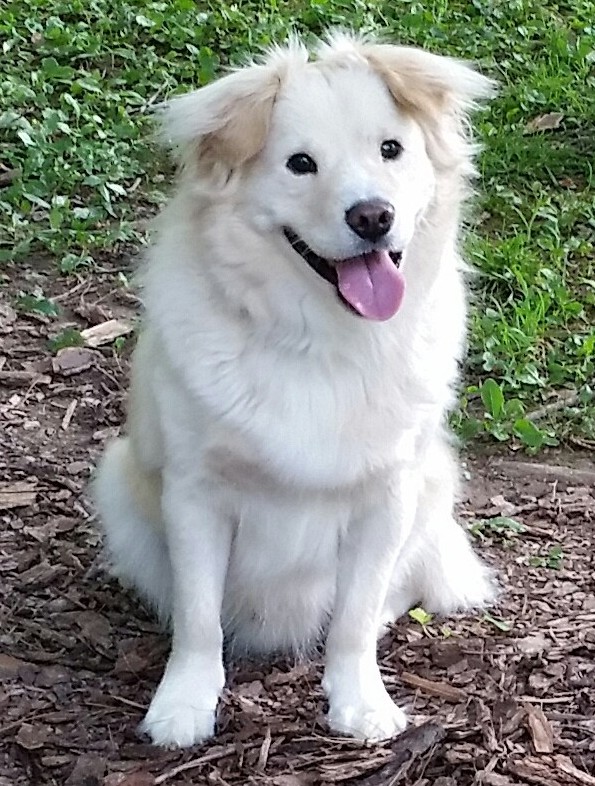 Linus, a chow/aussie mix, is slowly going blind from retinas that are eroding.

I had noticed his pupils were very dilated from the very beginning, but, human nature, didn’t want him to have anything wrong. I always had an excuse: it’s shady, it’s dim lighting here, etc.  Finally, after the second bite, I couldn’t deny it, and performed an ophthalmic exam. Bottom line –  his retinas were very abnormal, causing serious vision problems!
I took him to my specialist friend, Dr. Kice at MVRC, who has all the fun eye toys (and let me play!). We confirmed the diagnosis of PRA (Progressive Retinal Atrophy) – the cells in the back of the eye that process light are dead or dying. Translation – he’s slowly going blind, has lost over half his vision already, and nothing and no one can stop it. After confirming he’ll be 100% blind in a year or so, we decided to adopt him. Knowing he can’t see well, talking to him before petting, and adjusting his surroundings has led to no more bites, no more collisions, and one happy dog!

I am so thankful we got him. He was picked up in a very bad area of St. Louis, injured, severely malnourished, and dragging a chain. I can only imagine how terrifying life had to be with his visual impairment. I’m sure he was someone’s yard dog, living on a chain, lucky if he had food thrown at him. Maybe they dumped him when he tried to bite from his fear?

Food for thought – aggression often doesn’t just happen for no reason. Look for any contributing factors, and be understanding. We ended up with a fantastic dog that we love!