Everyone hears tick disease, they think of Lyme disease. And that’s great….if you live in an area where Lyme is the most common tick-borne disease (which is the Northeast and in and around Wisconsin). People can get it, as can dogs, and even outdoorsy cats. In our area, Lyme disease is not nearly as common as Ehrlichiosis. Lyme disease is a lot easier to pronounce though. Bummer.

Ehrlichiosis (pronounced air-LICK-ee-OH-sis) describes a family of bacteria transmitted by ticks that can make people, dogs, and cats very sick. There are three species of Ehrlichia bacteria that can infect pets: E. Canis, E. chaffeensis, and E. ewingii. Fun names to say!

Fortunately, most pets who are bitten by a tick and contract the bacteria are able to fight off the disease. Some dogs get sick (fever, lethargy, joint pain) for a few days, then recover. Some dogs never show symptoms at all, as their immune system efficiently creates antibodies that kill the bacteria. However, some dogs can become very ill, with enlarged lymph nodes, fever, lethargy, and even altered clotting ability. These dogs can be treated with an antibiotic, and most recover fully. If not treated, some dogs can enter into the “chronic phase” which can result in extreme weight loss, organ failure, arthritis, and meningitis over time. 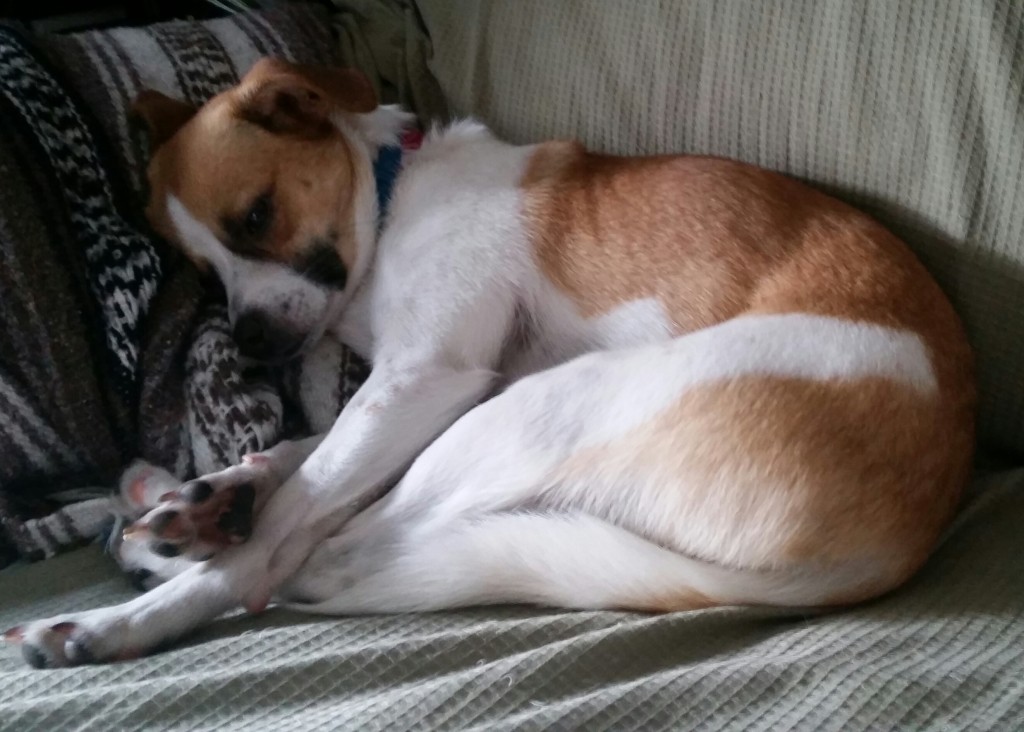 Dogs with tick-borne diseases are painful, lethargic, and have fevers.

The best means of disease preventions is – tick prevention! Many safe and effective products are available to prevent ticks from biting long enough to transmit disease (see below). It takes 24-48 hours of a tick feeding to inject the bacteria. Most tick preventatives kill the tick in about 8 hours, so while you might see dead ticks, they died before they could transmit disease.

Manually inspecting your dog for ticks is not considered effective. Sure, the big juicy ones are easy to spot. Guess what – those are not the life stage that usually transmits disease! What spreads diseases are the nymphs – a larval stage about the size of a sesame seed. They feed for a few days, then leave your dog to go look for a rabbit or something. Good luck seeing one of those on your dog!

We can test if your dog has been exposed to any of the three Ehrlichias now! A great new test just came out that shows if your dog has antibodies to the disease. It’s run like a heartworm test, so we can have the result in just a few minutes. A positive test does not mean your dog has the disease – it just means he encountered the disease, and likely fought it off. If he or she is acting sick, there are additional test we can do to find out if it’s Ehrlichia causing the symptoms. A positive test tells us that ticks carrying the disease have successfully fed on your pet, so meticulous tick protection is in order! A negative test means either your tick prevention is working, and/or no ticks carrying the disease have come across your dog.