Your vet might have told you she suspects your dog has cushings disease. It’s a complicated disease with many aspects. This article is longer than most, and has a lot of information. Get comfortable. Maybe grab a beverage.

Here’s what you need to know.

First, your dog has two adrenal glands, just like people, in her abdomen, near her kidneys. We mostly associate these glands with the phrase “adrenaline rush.” But what is adrenaline? Medically, we doctors call it cortisol (pronounced KOR-tu-sol.) It’s (normally) secreted by the adrenal glands when the body is stressed. It causes an increase in heart rate and blood pressure, and prepares us for the “fight or flight” response we all learned about in high school biology class. Cushings disease is a syndrome where the adrenal glands are secreting too much cortisol every single day, and not in response to a stress stimulus.

Dogs with cushings often pant a lot, drink a LOT of water, and therefore pee a lot. They have high blood pressure, and may seem restless. Often they experience muscle wasting, which causes a pot belly appearance. Some dogs have skin infections and/or hair loss. In my experience, dogs with early stages of cushings disease may only show an increase in water intake and urination as symptoms.

The extra cortisol floating around the dog is the same, physiologically, as her being on a steroid like prednisone. Think about how a dog acts on prednisone – they drink a lot, pee a lot, pant a lot, may be restless….sound familiar? The excess cortisol also makes her more prone to bladder infections (it suppresses the immune system slightly).

Your veterinarian might have suggested your dog has cushings based on physical exam and symptoms. She’ll probably want to collect a urine sample. We can measure how watery or concentrated urine is and assign it a number. The more watery the urine, the more the dog is drinking. If the urine concentration is above a certain threshold, we can eliminate cushings as a possibility. If a dog is not drinking a lot and peeing a lot, it can’t be cushings.

If your dog’s urine IS watery, and she IS drinking and peeing a quite a bit, we vets like to run a basic blood panel. Other diseases, such as diabetes, calcium disorders, kidney failure, or electrolyte disturbances (Sodium and Potassium) can be easily diagnosed with a routine blood panel.

But that basic blood panel rules other diseases in or out. There is one enzyme associated with the liver (called alkaline phosphatase) that increases in response to excess cortisol. It also can make us vets lean more towards cushings, but we need more tests to get a confirmed diagnosis. Liver disease can cause this alkaline phosphatase enzyme to rise as well.

The next step is officially getting a diagnosis.  One good test is an ultrasound of the abdomen. We can look at the liver as well as the adrenal glands, and measure them for enlargement. This job is best left to a specialist in ultrasound, as adrenal glands live right by the kidneys, and can be very difficult to find in an abdomen.

The gold standard test requires an 8-hour stay in the clinic. The test is called an LDDS, which stands for Low-Dose Dexamethasone Suppression test. We draw your dog’s blood to start (for a baseline cortisol level), then give her a shot to tell the adrenal glands to cool it and not secrete cortisol for a while. (This shot is a steroid called dexamethasone). We measure her blood at 4 and 8 hours after this shot, and the cortisol levels at these times tell us if it is cushings, and even indicates which kind.

Which kind? There’s more than one kind of cushings? Are you freaking kidding me?!?! 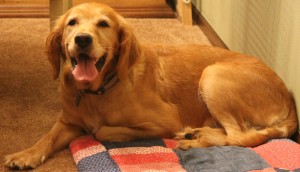 Dogs with cushings often pant when lying down

A small percentage of dogs with this type of cushings will develop a major complication called macroadenoma. Basically, the overzealous pituitary gland doesn’t just send too much stimulation to the adrenal glands, but it grows in physical size. It basically becomes a brain tumor, and compresses other parts of the brain. This causes neurologic symptoms that can vary from a dog seeming mentally “off” to seizures. The only way to diagnose this is with a CT or MRI, unfortunately. Again, this only happens in a small percentage of dogs with this type of cushings, but if your dog’s personality changes, worth keeping in mind. In a perfect world, every dog diagnosed with the pituitary dependent type of cushings would get a CT or MRI to check for macroadenoma. However, this procedure involves general anesthesia, which most owners aren’t too excited about. And the procedure runs about $1,000 – $2,000, which may be not feasible for many owners. We’re not in a perfect world.

The other type of cushings disease is a tumor of the adrenal gland. Often, one adrenal gland (the one with the “tumor”) will become very large, as it is secreting all the cortisol it wants. The adrenal gland on the opposite side actually shrinks. It figures it really isn’t needed, since the other adrenal gland is doing such a remarkable job, why should it do any work? This type of cushings is not very responsive to any medical treatments. Surgical removal of the oversized, enthusiastic adrenal gland is often the best option. This is a VERY difficult and intricate surgery that must only be performed by a veterinarian who specializes in surgery.

If we confirm the diagnosis of cushings, and decide it is pituitary dependent, we then discuss treatment. It requires a significant amount of monitoring in the form of blood tests. There are two medications. The oldest is called Lysodren (pronounced LICE-o-dren). Some vets love this drug and use it with great success. I am not one of them. The way this medication works is it kills the cells in the adrenal gland that produce adrenaline. It is given as a “loading dose” once a day for 5-10 days, then given 2-3 times a week for maintenance. The reason I personally don’t love this medication is that I find it very difficult to regulate. Either the dog hasn’t gotten enough, and it still has cushings (AKA is cushenoid). Or she gets too much, then she lacks sufficient cortisol production. That pendulum keeps swinging, but never wants to stay in the center. Dogs need a small amount of cortisol every day to function. It maintains the health of the digestive tract, blood pressure, and can affect salt balance. Dogs who do not have sufficient cortisol levels have a whole different disease actually! It’s called Addison’s disease. This brings on a whole slew of problems, as dogs with Addison’s disease (or dogs who used to have cushings and got too much Lysodren) are often vomiting, not eating, and can have bad diarrhea – no fun.

A newer treatment for cushings has come out in the past 10 years, and it’s the one I prefer, called Vetoryl. Depending on your dog’s weight, the medication is given either once or twice a day, every day. It doesn’t tend to overshoot our goal and cause the dog to develop Addison’s disease as often as Lysodren does. It is very costly, to the tune of $70 – $200 a MONTH, depending on your dog’s size. But, the potential complications are much lower, so many clients are happy with it.

So, we’ve gotten the diagnosis. We’ve started treatment. You and your dog are trotting off into the sunset, right? I wish, but no, it isn’t that simple.

When we begin treatment, it is important to make sure we have your dog on the right dose of medication (either Lysodren or Vetoryl).  Each medication has a slightly different schedule, but generally, a couple weeks after we start, we’ll need to perform a test called an ACTH stimulation test. This is another stay in the hospital, but only 1-2 hours, not the 8 hours like the LDDS test. (Trying to find a silver lining here!). For the ACTH stim test, we draw your dog’s blood, then give a shot that tells the adrenal gland to “give me all ya got.” We then draw the blood 1-2 hours later (depending on which brand of shot given) and compare the cortisol levels resting (before) and after the “stimulation” shot. We want your dog to have SOME adrenal gland activity (and not have Addison’s disease – you remember that not being fun) but not too much, which is cushings disease. This ACTH stim test can run in the neighborhood of $200+ each time, so again, not cheap.

Ideally, once we get your dog on a steady dose, we’ll only need to monitor with an ACTH stim test once or twice a year. Some dogs we get regulated on their perfect dose right away. Others take a lot of tweaking and testing in the early weeks and months of treatment.

So yes, getting the diagnosis isn’t easy. And yes, treating can be frustrating in the beginning. And expensive. And monitoring is very important. And not cheap! For some owners, the expense of testing, medication, and monitoring is prohibitive, and just can’t be done, particularly with large dogs.

For this reason, many of my big dog patients with (suspected) cushings do not pursue diagnosis or treatment. You’re not a bad person if you choose that option! You do what you can do. I get it.

Dog’s don’t die of cushings. It is a pain in the rear though! The high blood pressure, the panting, the drinking and peeing, the on and off bladder infections, the muscle breakdown. Some dogs do well living with cushings not treated. Others experience complications for the effects of the disease. It is important to monitor these dog’s comfort level, particularly monitoring for bladder infections that can exist with no signs or symptoms. Some dogs experience incontinence (urine leakage, especially when sleeping) because they are drinking so much water. One important thing to point out – if your dog is experiencing significant effects of the disease, in particular the muscle and tendon breakdown, these changes are often not reversible once treatment is started. So if you’re thinking of not treating until “It gets bad” it will be too little, too late. Fortunately, this feature only becomes severe in a minority of dogs.

If your veterinarian suspects your dog has cushings disease, you have options. Blood tests, urine tests, and ultrasound of the abdomen are all good steps to start. Talk to your vet about your options and your budget, and you both can decide what’s best for your individual dog.